I took a coffee break this afternoon and walked back into my Florida office to see this perfect still life. It reminded me that I should announce that the second installment of the WondLa trilogy is well on its way. 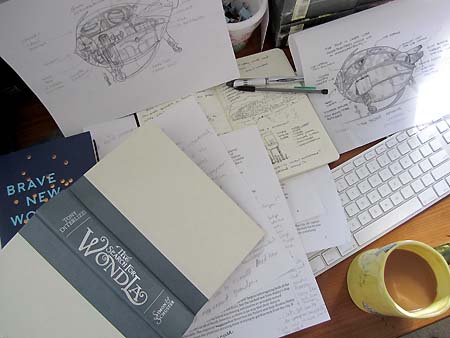 When I started outlining The Search for WondLa, I planned what I hoped to be an epic tale. I broke the story up in three places based on the growing stages of the heroine, Eva Nine. Since so many fairy tales begin with the hero being an orphan, or a parentless “child of the world”, I decided to rewind Eva’s tale a bit. I felt the lead up to the events that would make her an orphan were integral to her emotional growth as her adventure unfolded.

Now I must push her forward into the complicated real world that she will ultimately have an effect on. Much of the emotional plot in book 2 deals with Eva coming to terms with the fact that she is more than just different, she is a truly empowered hero.

For Eva, learning always comes at a cost. In book 1 it was physical and emotional costs, but in 2 I feel the cost may be a loss of innocence and a shard of childhood. After all, that is part of growing up. (Frankly, I won’t really know until the writing is completed. Sometimes these themes evolve along the way.)

Of interest in the above photo are the detailed drawings of Hailey’s ship where many scenes take place. Though the airship is obviously a product of my imagination, I used a combination of traditional boat and airplane terms to describe it. Also, you’ll see an open Moleskine notebook which I’ve carried with me for the better part of a year. It is full of notes, notions and drawings on what I hope to incorporate in books 2 & 3. (There’s even a cover sketch in it!)

Lastly, you may see a copy of Aldous Huxley’s Brave New World. For homework, I reread this and George Orwell’s Nineteen-Eighty-Four all in preparation for the creation of my human city…

I’ll be working on the story and art for the entire year with a release date of early 2012. I know its a bit of a wait, but I want to take the time to make this an exciting solid sequel.