I am excited to reveal an extremely limited  exclusive giveaway, a sculpted maquette of Muthr – the robotic character from my upcoming illustrated novel, The Search for WondLa – that will be available at next week’s Comic Con in San Diego.  Take a look: 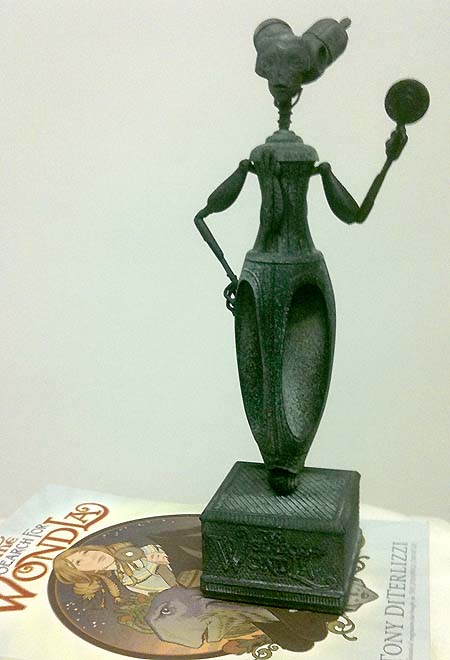 The maquette and signed books will be available at an auction to benefit The Comic Book Legal defense Fund. Here are the details:

From the mind of Tony DiTerlizzi, creator of The Spiderwick Chronicles comes The Search for WondLa, the start of a new trilogy that’s already been optioned for the screen!

This maquette, MUTHR is generously contributed by DiTerlizzi and Simon & Schuster Young Readers. MUTHR is Multi Utility Task Help Robot, and is brilliantly sculpted and painted by Martin Meunier, the award-winning sculptor/model maker and graphic designer whose film credits include Coraline, James and the Giant Peach, and The Spiderwick Chronicles the film on which he met author and illustrator Tony DiTerlizzi. Martin has worked for FX Company as well as film studios Industrial Light and Magic, Pixar, Disney, and Universal.

Intricately crafted and cast in hard resin, MUTHR Maquette is a limited edition of 100 worldwide, signed by Tony DiTerlizzi.

The auction will be held next Saturday night at 7:30 in room 3 of the San Diego Convention Center.

I can tell you these maquettes are EXTREMELY exclusive. Of the 100 made for Simon & Schuster, most were given to early industry supporters of the book. Two have been raffled off so far (one at BookExpo and one at last month’s ALA conference), but this is the only time one will be available for purchase.

Best of luck to all attendees and happy bidding!