Will Work for Food

Rovender Kitt in The Search for WondLa: “Sure, I eat because I have to. But I also eat because I want to. It is one of life’s few pleasures.”

Has anyone ever had a popover? If you have, you know the mouthwatering awesomeness that comes with ripping open this puffnormous egg-battered muffin and dipping it into sweet apple butter. Fattening: Um, what do you think? Taste: The only thing better would be an ice cream flavor called “Apple Butter Popover”.

There is a restaurant in the center of our town, called Judie’s, that serves a pretty amazing popover. Bear in mind, I was introduced to this beloved pastry in New York City by a popover expert named Michael Kaluta at his favorite haunt, Popover Café, so my standards are high. And I daresay that Judie’s restaurant exceeds that standard. (I’m simply stating this so Kaluta will come for a visit to challenge my statement…then fall in love with the area, move here, and we can hang out again like we used to.) 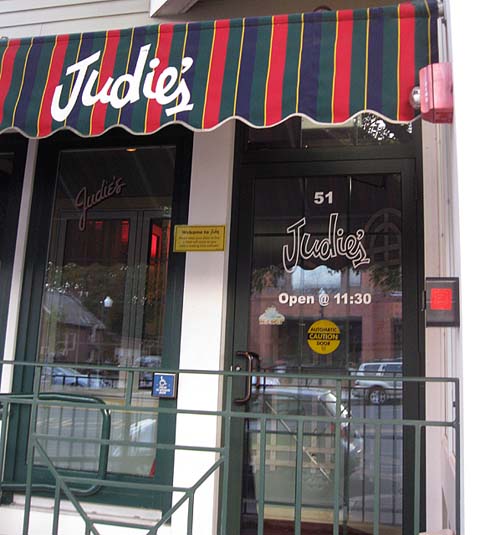 We’ve been enjoying Judie’s cooking since we moved to Amherst in 2002. Sophia loves the soups (like her mom), the sun fries, and of course a popover. Soph will happily rip and dip her pop with one hand while scribbling away with another on Judie’s coloring page as she waits for her entrée to arrive. Imagine our delight one evening while dining, when Judie herself sat down to catch up with us about all things DiTerlizzi.

Judie: “Wow. Sophia is getting big. And she likes to color, just like her dad.”

Ang: “You know, Judie, you should think about a new coloring page…”

Judie: “Yeah. We’ve had this one for awhile. It may be time to retire it. But who would draw the new one?” 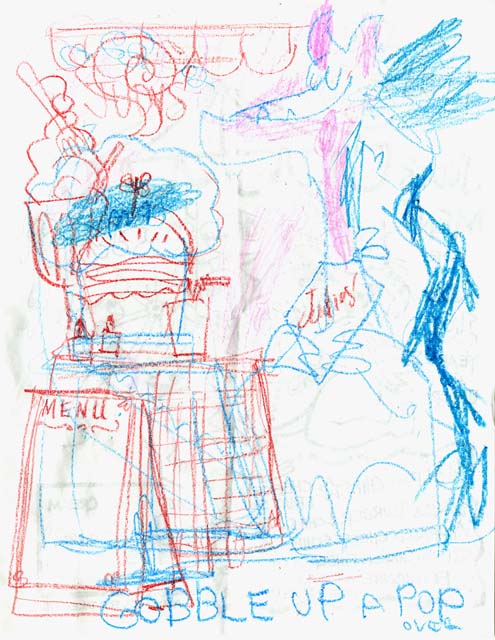 …above is my sketch done that night with Sophia. She thought a dragon would be cool to color for both boys and girls. I like that. I hope my fellow Amherstians do too. 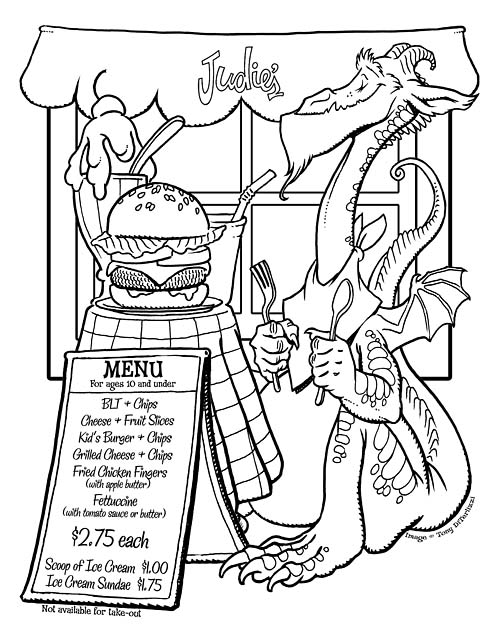 And, yes – I asked Judie to pay me in food. Specifically popovers. I may be a few extra pounds when you see me next, but I’ll be smiling.