I am happy to tell you that all sketches for the interior art for Hero for WondLa are complete and I am now inking them like a madman. The art production will take me into the end of January after which the book will be ready to send off to the printer…and just in time for its May release. 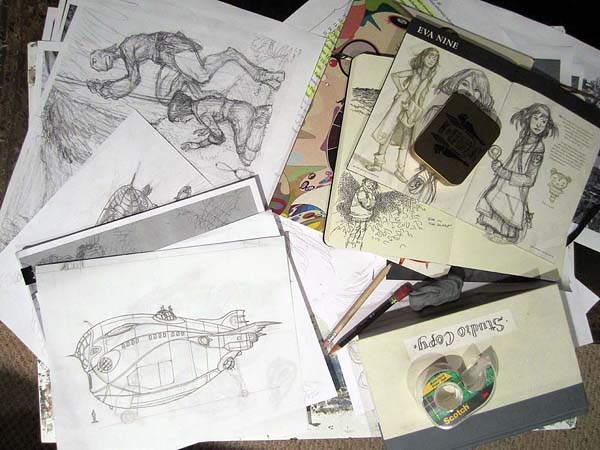 As I read through the manuscript with my illustrator’s hat on, I realized that with WondLa I am often faced with the same dilemma I had with the Spiderwick books – What image do I draw? What scene or action is the right one to illustrate? How can I present the story to the best of my abilities?

My general rule when illustrating the chapter images in a novel is to render the most exciting scene from the chapter without giving away too much. I want to entice the reader to keep going, turn the page, read just one more chapter, before they put the book down. Sometimes I pull it off, sometimes I don’t. It is a tough balancing act. 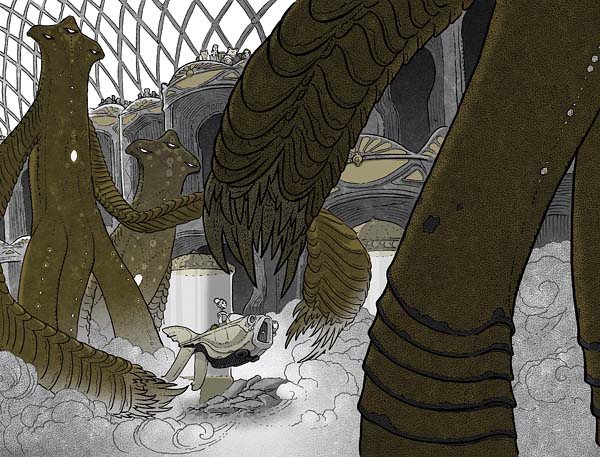 …instead, you would have seen an illustration of Eva reuniting with Muthr in the Royal Museum of Solas. Sure, it would have been a nice emotional moment, but you wouldn’t see how menacing the pillar guards are. Besides, this was one of the first sketches I did for the book. I couldn’t wait to finish it. This leads me to my first rule of thumb on choosing a scene to illustrate:

If I think its cool, chances are the reader will too.

Let me elaborate: If I am excited to draw something, that enthusiasm is going to come through in the work. I’ll put in the extra effort to render it to the best of my ability and hopefully the reader will respond positively. Of course, there are other reasons for choosing a particular scene to illustrate. Here are some of my determining factors: 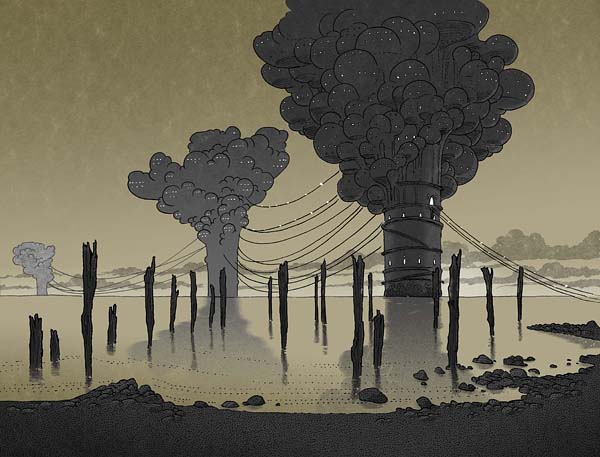 Reader Comprehension – An author can spend pages describing what a scene looks like, (sometimes bringing the story to screeching halt) or simply show what something looks like. This approach is used in my picture books and I have adopted it into my middle-grade novel illustration. It has helped especially in complicated, otherworldly things in WondLa, like the towers of Lacus (as seen above). I want my younger readers to enjoy the story and not have to labor too hard over the text. 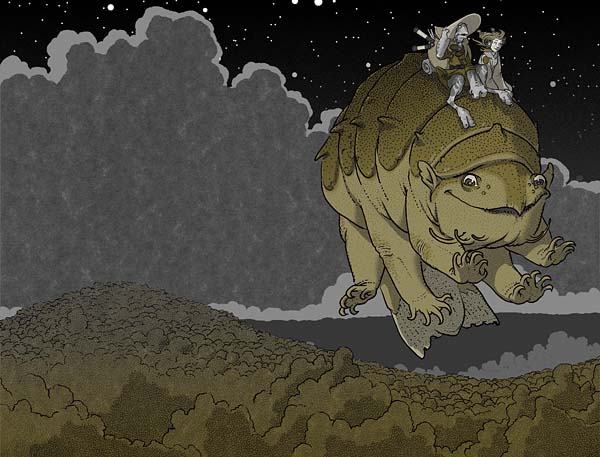 Elaborate on a Point – Sometimes I want emphasis on something in the text so that the point is understood or the moment made more memorable. For instance, in chapter 10 of Search for WondLa I wanted you to see that Otto (and therefore all giant water bears) are capable of leaping quite high. For those who’ve read the book, they will tell you this comes into play later in the story. 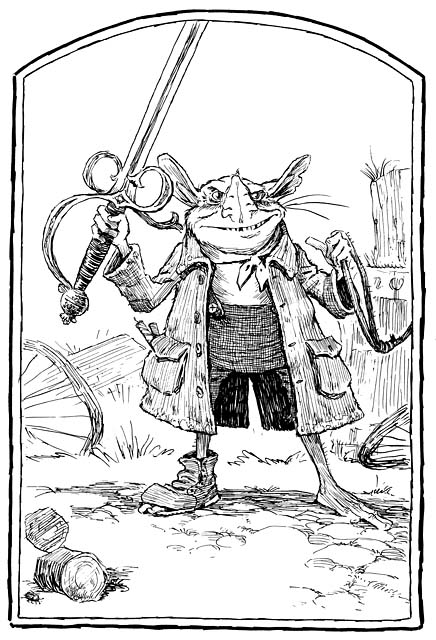 Focus on a Passage Less Described  – Sometimes the opposite is true. I like to take a moment or passage that is passed over briefly in the text and add to it. This is absolutely the approach I use for illustrating a picture book as it can add greatly to the size and depth of a story. Above is a image of Hogsqueal boasting about capturing Jared and Mallory from Spiderwick. Holly’s text simply read,

“I caught the humans,” Hogsqueal called.

Yet it is obvious in the art that there is no way Hogsqueal could handle that sword, let alone disarm Mallory. So the art here elaborates on the text showing that Hogsqueal is bluffing. 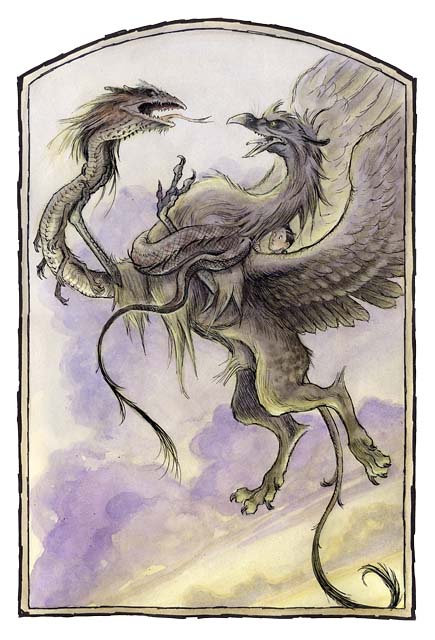 Setting the Mood – One of the more important aspects in choosing a moment to illustrate is what emotional tone will it convey that is concurrent with the text. I did this throughout the Spiderwick series by use of a color plate tipped in the front of the book that represented the general mood of the story. For the finale, The Wrath of Mulgurath, the image (above) represents the struggle of good against evil as the sun sets (i.e. time is running out) on our heroes.

All of the above factors contribute to my choices on what passage of text should be rendered. As I said sometimes I get it right, sometimes I don’t. Below are a few examples from The Search for WondLa where I had to make tough decisions. Do you think I made the right choices? 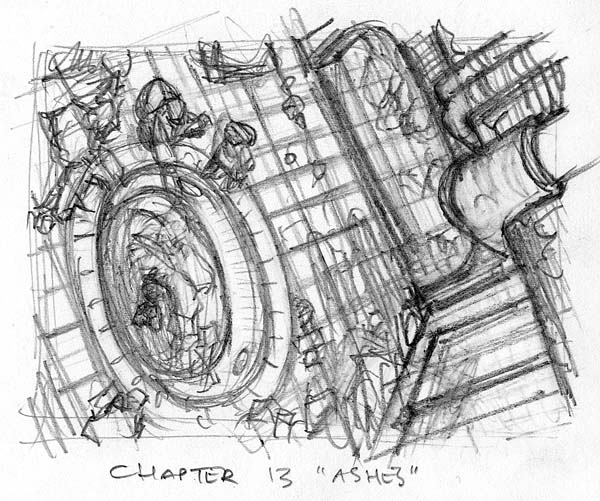 This is a thumbnail drawing of the opening image for chapter 14 (mislabeled here). It was to be a bird’s-eye view of the gymnasium in Eva’s Sanctuary with Rovender and Eva finding Muthr at the bottom of the pool. I wanted to show more of Eva’s Sanctuary and the destruction caused by Besteel, but I felt that this zoomed out view lessened the impact of the disaster. 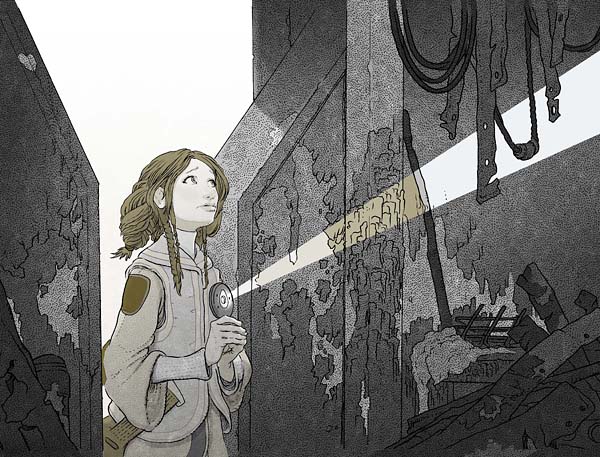 Here in the final art, I switched the focus to Eva and we can see how distressed she is (Setting the Mood). Can you imagine walking into your house and it looks like this? 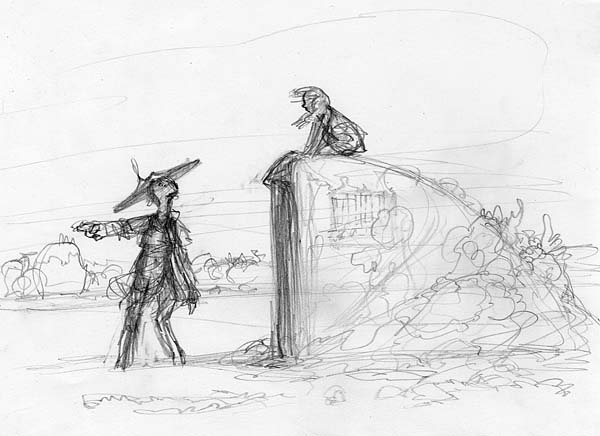 Above was one of my favorite sketches done while developing the story. It simply depicts Rovender telling Eva to get off of his home. I liked it because it showed an entrance to a Sanctuary and gave a clear depiction of what Rovender looked like. But this action fell at the very end of chapter 7, so putting it as the opener would have diffused the surprise at the end of the chapter. In the following chapter, the interaction between the two characters is more intense, so it would have lessened the tension. Consequently, it was not used. 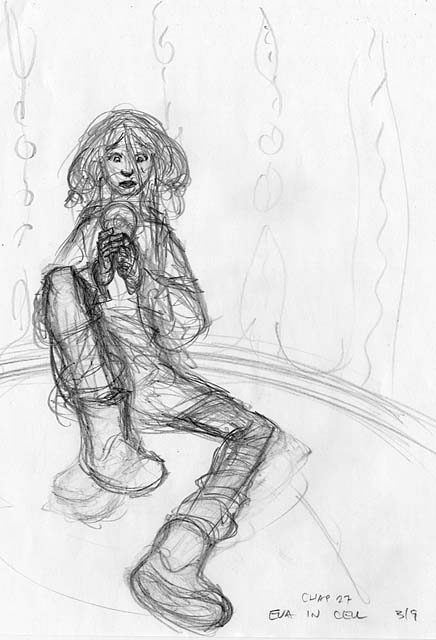 Another sketch not used was this one from chapter 26 showing a worried Eva locked in a cell at the Royal Museum of Solas (again, the sketch was mislabeled). Though she is a bit lanky here, I loved the body form and the fact that I could demonstrate how Eva is relying on her Omnipod to get her out of a sticky situation (instead of using her head). However, I thought it best to illustrate the two alien characters that are introduced in this chapter instead. Besides, at this point in the book we’ve seen Eva enough times to imagine her in her various states of fear. 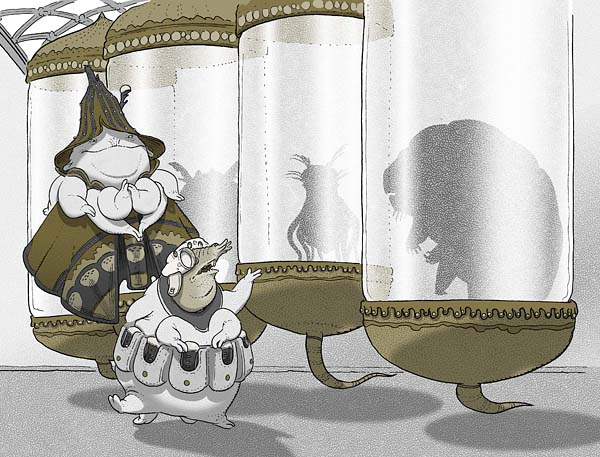 Anybody recognize the critter in the cell second from the left? Like my other books, WondLa has little nods to characters in my other stories. I’ll have to show you sometime…but that’s another blog post.

Okay, back to illustrating.