The Search for a WondLaful Cover (Part I)

While my first draft of The Battle for WondLa was read by my editor and trusted beta-readers, I switched my focus from writing to drawing. In particular, drawing the perfect cover image to depict the climatic conclusion of the WondLa trilogy. 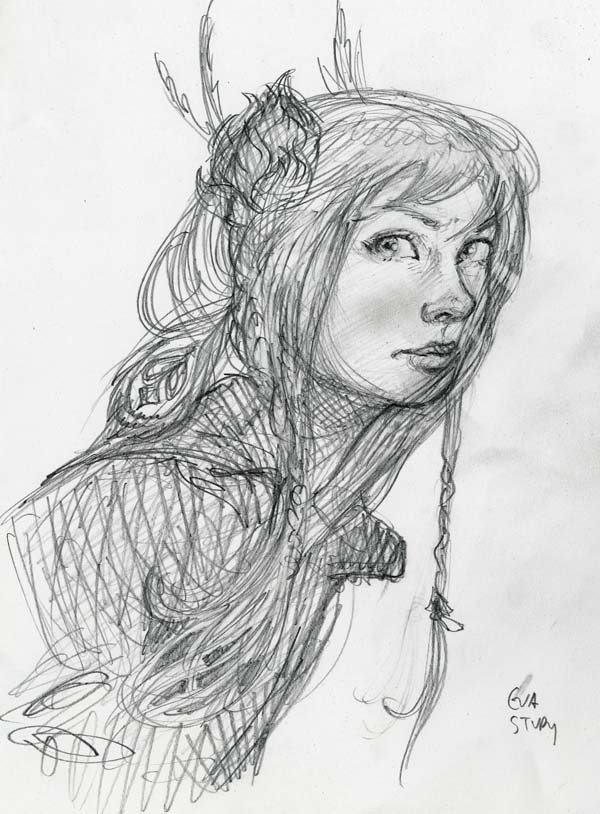 I had started with sketches of Eva, just to reacquaint myself with her visually. Some readers have noticed that I’ve explored different visual motifs with Eva in each book. In the third story she returns to the knotty braids she had in book 1, though with elements of the forest (like seedpods and feathers) woven into her colorless hair. To me, this signifies her relationship and bond with the natural world.

The juxtaposition of Eva as a “nymph of the forest” facing the reality of war was something I wanted to convey on this jacket…especially a jacket with the word “Battle” in its title.

My first idea was of Eva on the precipice of a city in fiery ruin. It was Eva on the brink of war. 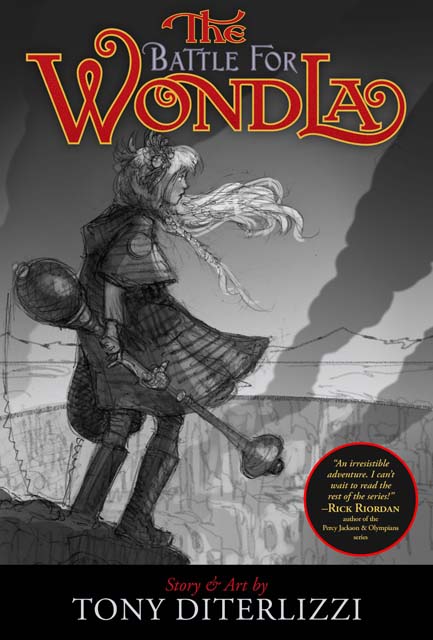 However, this seemed a bit of a static, posed image to me. Next, I tried for a scene with a bit more action in it. Something to draw the reader into the peril Eva faces in the story. 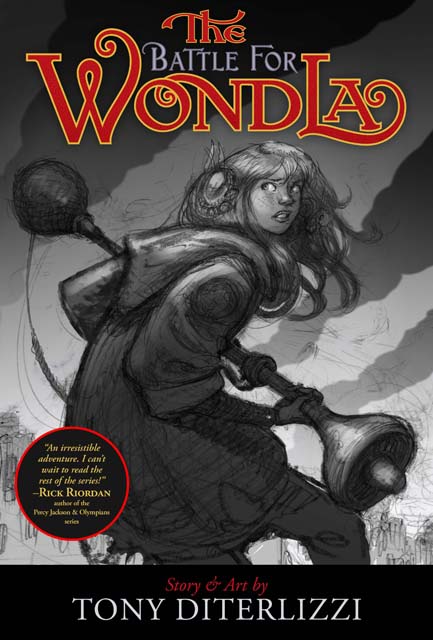 Both concepts needed refining, but I sent them off to the art director at Simon & Schuster to see how the team there would react. They preferred Eva on the rim, but suggested she be posed in a more heroic and determined stance. I returned to the sketch and tried for a more natural pose that I’d hope would suggest Eva’s confidence. 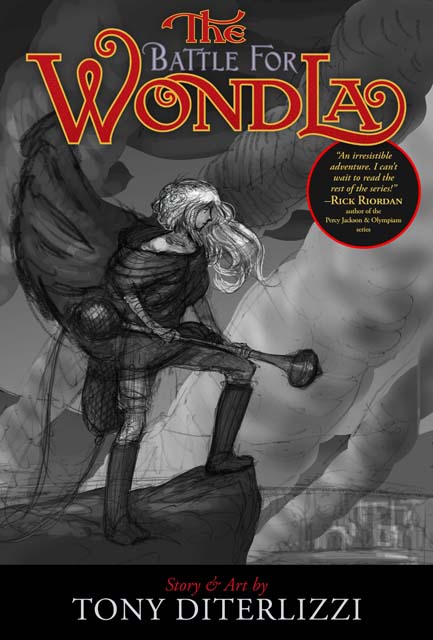 This piece didn’t have the wow-factor for me. Eva looked stiff and overall it seemed weaker than the first sketch. Also, in my attempt to make her more (super)heroic by blowing her poncho up (thus alluding to a cape), I ended up making her look as though she now had fairy wings. I shelved this sketch and tried for another concept altogether. Perhaps placing her in the chaos of the city under attack would ramp up the drama. In this setting, I could contrast the fear and panic of the crowd with the calm determination of Eva. 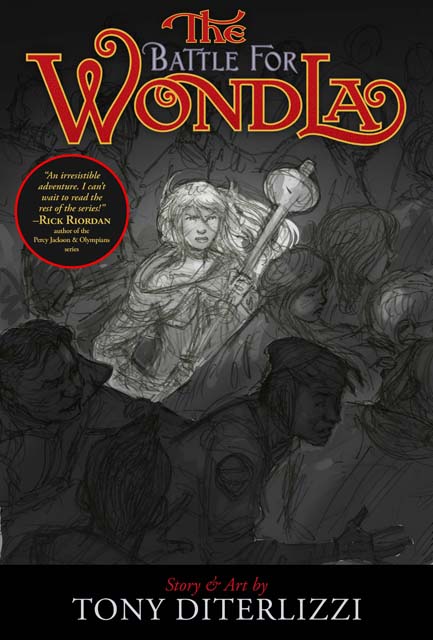 I liked where this was heading, and it looked different than anything I had seen in the bookstore. Though the crowd is running left-to-right while Eva faces the viewer, a tweak on the direction of the crowd would really bring it home. In fact, having them swirl around her – as in a vortex of humanity – could be quite powerful. I sent this sketch off to the art director at Simon & Schuster to await feedback. In the rarest of circumstances, I was informed that the team liked all three designs and that I could ultimately choose which image to use on the book’s jacket.

Everyone I shared my sketches with responded to different images. To get some public opinion, I conducted a little research test and posted all three on my facebook and twitter page. To my delight, I received feedback from many of my readers including the likes of Jenni Holm, Mike Mignola and even Jim Gurney. Though many picked up on my thinking of the third sketch, the first drawing (of Eva on the rim of ruined city) received the most positive responses. When I tallied up the comments, sketch #1 took it by a landslide. 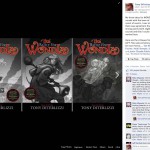 Understandably, this was small group responding but the feedback was undeniable. Perhaps there was something in that original concept that was speaking to people. Perhaps it was a child facing the realities of the world while standing on the brink of adulthood? Perhaps the composition of the image itself resonated as something they’d seen before? Perhaps it was simply because Eva appeared alone, yet determined, in the wide expanse of the world – ready to take on the challenge of another day.

Invigorated, I went back to the drawing board and gave it one more shot. 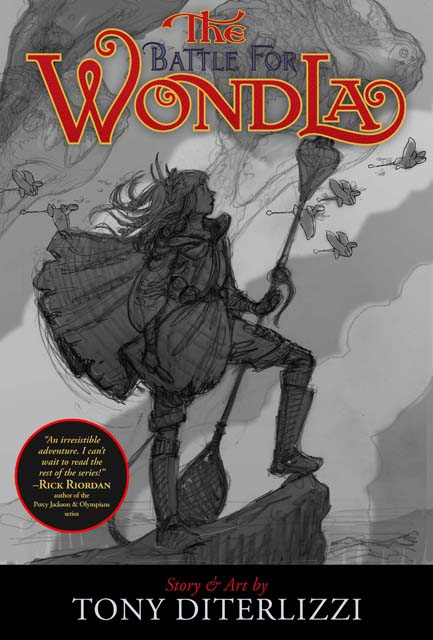 Now there was something about the drawing that was intrinsic to the theme of this story. The splendor and danger of our natural world contrasted with the splendor of mankind’s capabilities and the danger we can inflict upon one another. Eva is balanced between both worlds. In the final sketch, I put the horizon right in the middle of the image to drive that point home. Eva is caught between two worlds. Will she ever find her home – her WondLa – in either of them? 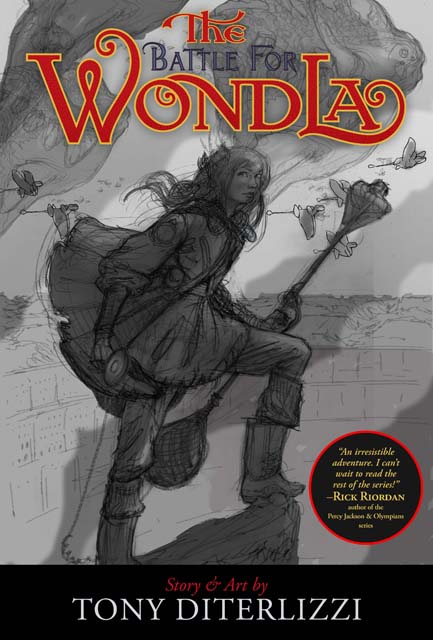 After the sketch was approved it was onto color studies to find just the right palette to convey the mood of the book and the emotion of the scene. But more on that next time…