Much apologies, dear readers, for not being as active as I’d like to be on here. The last few months have been a blur of steady work.

After the “Spiderwick Farewell Tour” in September, I began rewriting the 2nd draft of my novel – which is due to release this September(!) The writing continued on right through the holidays and I had to really buckle down to keep it on track. That said, I am SO EXCITED to share this story with all of you. 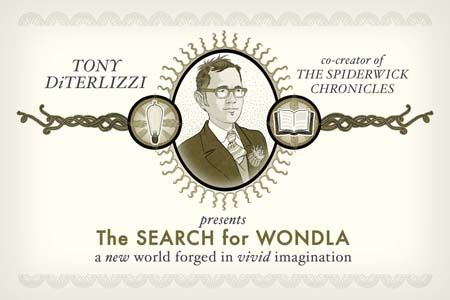 The Search for WondLa is about a girl raised by a robot on an alien planet looking for home. For me, it is an exercise in world-building that reflects the work I did early in my career for role-playing games, like Planescape. It will be about 300 pages and will have illustrations throughout. I can’t say much more at this time, as I want to do a proper reveal once the time is right. I can say that it is the first book in a trilogy of novels that will also include an “Art of” book.

I will be promoting it this fall with a national tour. For that, I am working on a detailed presentation of my creative process. I’m thinking of a slide-show where I’d show my work, and the thinking that went into it, throughout the years. In fact, 2010 marks my 10-year anniversary in children’s publishing with the release of my debut picture book, Jimmy Zangwow’s Out-of-this-World Moon Pie Adventure.

What do you think of the presentation idea? Is that something you’d like to see?