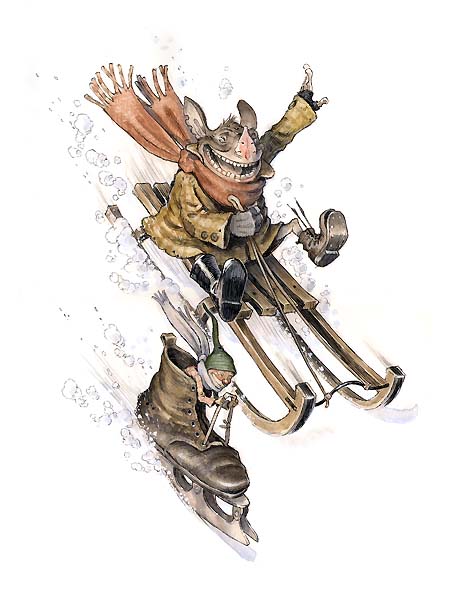 I hope everyone has had a great holiday season so far. I just wanted to post a New Year’s message to all of my fans, friends and fam out there who made 2007 such a memorable year for me.

I have so many things to be thankful for: My best friend and wife, Angela, gave us a beautiful little girl in May and our lives have been much more richer (and hectic) forever since. My other child, The Spiderwick books, that I’ve created with Holly have been more successful than I ever could have imagined. The first sequel book, The Nixie’s Song, came out this fall and debuted at #1 on the New York Times bestseller list! Say wha!?

And, of course, I am terribly excited about the upcoming film. This is the stuff of dreams-come-true for me. Whether the movie is received well by critics, or does great opening weekend, I can tell you that I absolutely enjoyed it and that it upheld the spirit of the stories, and the visual world that I created – you can’t ask for much more than that.

2008 should be an exciting year with the film, video game, toys, Happy Meals, etc, releasing in February. There should be lots of Spiderwicky-goodness out there for even the most die-hard fans. And we’ll be releasing the second book in the sequel, A Giant Problem, in September.

Before that, I will be debuting my first solo middle-grade novel, Kenny & The Dragon, in August. The 200-page illustrated book is a retelling of The Reluctant Dragon, and I am so anxious to hear what readers think. I am really happy with how it is shaping up (as of this writing, I am almost done with it.)

There will be book tours, both in the US and UK, and a BIG announcement from yours truly on a new project that is aimed for readers a little older than the Spiderwick crowd. So stay tuned, and THANK YOU for allowing me to do what I do for a living.

All the best to you and your family (especially the troops overseas) from our family,
-Tony, Ang & Sophia