TGIF! What a week in DiTerlizziland! I have been up to my eyeballs in creating the artwork for the Spiderwick finale, The Wyrm King. As I continue my drawing/inking warm-ups for each day’s session, I have been rendering some fun stuff that is looong overdue to some of my friends – including this pen & ink art trade with Dinotopia demigod, James Gurney.

Jim rendered a super-cool piece for the upcoming Spiderwick Chronicles Completely Fantastical Edition – which (as I’ve mentioned before) contains the first five books, lost chapters from Holly, a sketchbook from yours truly, and a SICK art gallery by some of my drawin’ pals. Jim said I could have his submission for a trade, and (of course) I jumped at the opportunity. 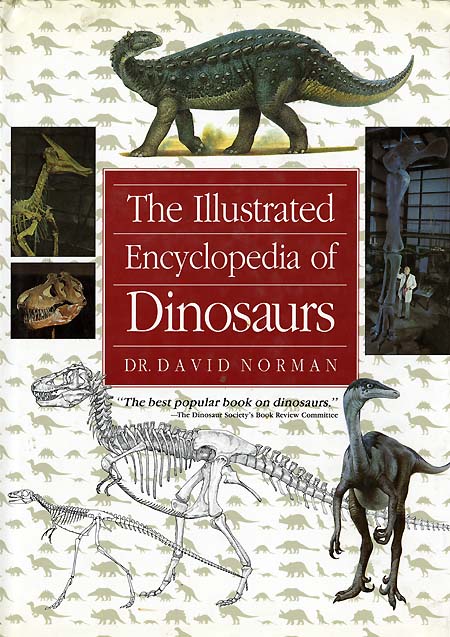 I went back to the original Dinotopia and found a nice vignette of the hero, Will, meeting Bix, the benevolent protoceratops. I wanted to do my take on this scene, mainly because I would LOVE to be in Will’s shoes. (And, also, because the idea of becoming friends with a dinosaur is not too far removed from becoming friends with a creature of the faerie realm).

What got me juiced was re-interpreting the dinosaur and incorporating some of the current theories linking dinos to birds. So that is the place that I went to for my reference. I cracked open Dr. David Norman’s Illustrated Encyclopedia of Dinosaurs, which had reconstructions of the protoceratops, but (more importantly) had a very detailed line-drawing of the skeleton – a structure to build upon. 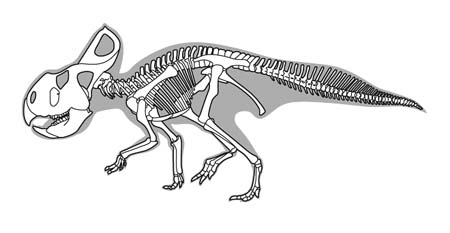 Immediately, I thought exotic parrots in the rainforest…or even prairie chickens found in the western U.S.. Right away, I knew Bix was going to be feathered. 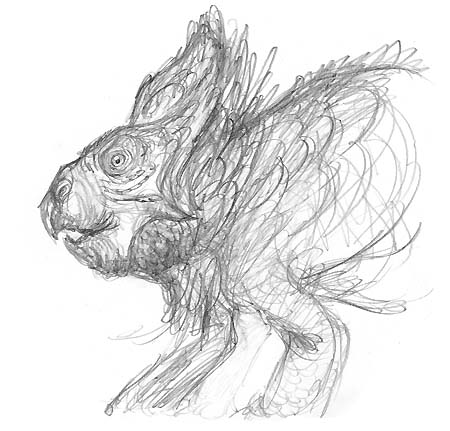 I sketched Will up on a second sheet of paper and composited the two sketches in Photoshop. This is great for sizing and moving around the figures. I even adjusted the balance of Bix by straightening his left leg to hold his weight. 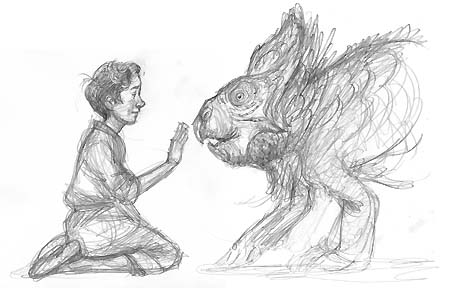 I transferred the 11×14″ sketch onto Strathmore plate 2-ply bristol using my light table, refined the pencil lines, and inked it up using FW inks and a Hunts 102 nib. I even gave it the trademark Spiderwick dual-border (which I outline with a ruler and pencil, then ink freehand.) 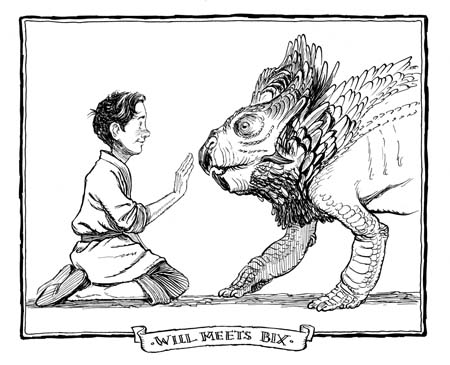 I hope you like it Jim, I’ll have to blop some watercolor on a print out at some point…unless someone out there is really good at digital coloring…

PS – Update! Jim posted his image (of Hogsqueal riding on Bix) on his site. He even included a little video of himself inking the piece…check it out!