Evolution of a GOBLIN (epilogue) 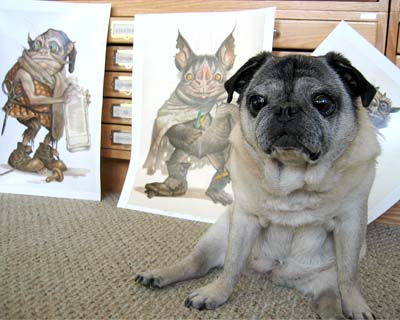 My brother, Adam, has pointed out one very important element in this discussion of all things goblin. I would be remiss to not talk about a certain four-legged muse of mine aptly named “Goblin”.

Visually, as an artist, I get my inspiration from so many places. I remember one art school instructor telling me that all characters we render will have physical aspects of ourselves within them, because that is the face and body that we see multiple times every day – and I do think it is true.

The same could be said of our environment: our homes, yards, children, spouses and even our pets. And to say that our dog Goblin inspired and influenced my art would be an understatement.

Her pug proportions, mashed-up face, and lovable demeanor, creeped into characters like Ted, Hogsqueal and yes, the Spiderwick goblins (especially the “Bull Goblin”). And there are 2 gargoyles in the Arthur’s Field Guide that are inspired by pets – one is Goblin, the other Chamberlain, Holly’s greyhound.

We lost Goblin last fall to cancer. Because it had spread, I had to put her down, and it was the hardest thing I have ever done in my life. Angela and I were devastated. All I wanted was for my daughter to get meet this little dog who inspired me, and been our faithful companion for 13 years. She moved with us from Florida to New York City with stars in our eyes, and on to Massachusetts where we could all settle down and be a family. She is but a memory, but by being this artist’s muse, her influence will live on in the images inspired by her.

I guess there really are little goblins out there in the world after all.

We miss you Gob, and we’ll never forget you.