Evolution of a GOBLIN (conclusion)

Part 4 – Goblins in a Natural World
In Katharine Briggs’ “Faeries 101” book, An Encyclopedia of Fairies, she describes goblins as:

“A general name for evil and malicious spirits, usually small and grotesque in appearance…”

Using what few visual descriptions I could find, I began thinking and designing. From the start, I made them less human and more animal-like. As I’ve said before, there were plenty of great examples of humanoid goblins, and my designs would break no new ground down that path. Besides, I wanted my designs to speak to readers who may not be fans of fantasy. So I attempted to create for a broader audience and I tapped into more primal and instinctive imagery based on general ideas about goblins. 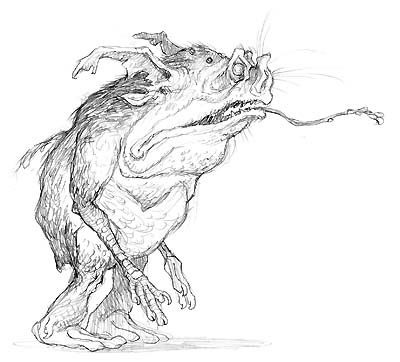 Okay, so what animals do we know of are active at night? I could give them large ominous eyes like a bush-baby, or I could give them pale, pupil-less eyes like those found on deep-sea fish. That’s much spookier. In fact, anglerfish in general are creepy looking. Their fleshy skin tags and patterning are ideal for camouflage- something a goblin would need to use to avoid detection. I bet they can change this pattern like a flounder to blend in seamlessly with their background so they can’t be spotted easily even with a seeing stone. 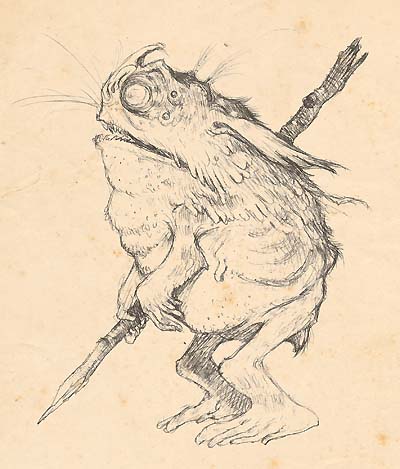 Hmmmm. As are toads and frogs (at least by most human standards – think of the cursed Frog Prince), so that was a good starting point. Bat’s faces are usually grotesque and conjure up images of nocturnal activity, plus they’ve plenty of extra-sensory whiskers which may prove handy – especially if these guys are blind. How about extra simple eyes for motion detection like those found on insects and spiders? That would be creepy. 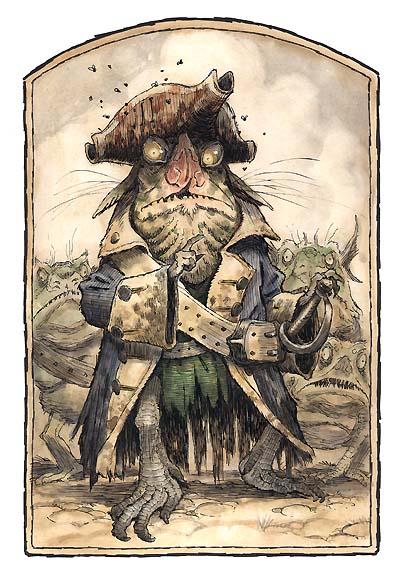 To indicate that they weren’t just ignorant bipedal frogs, I showed that they knew how to fashion tools and weapons and even understood artifacts gathered from humankind’s wake of refuse – hence the discarded scarf which I thought added a somewhat humorous contrast to such a gnarly critter. 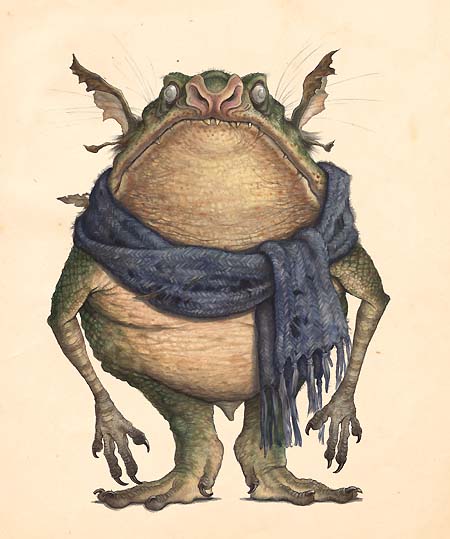 Lastly, I wanted to add something interesting to the folklore. Nowhere did I read that goblins are born without teeth. In fact, it would probably make more sense if they were born with teeth, perhaps even shedding them like a shark. But, I wanted to create an unusual and memorable natural feature to them…Besides, glass, bone, and metal shards were much more gruesome than just plain old teeth.

Part 5 – I Finally Add Something to Goblindom 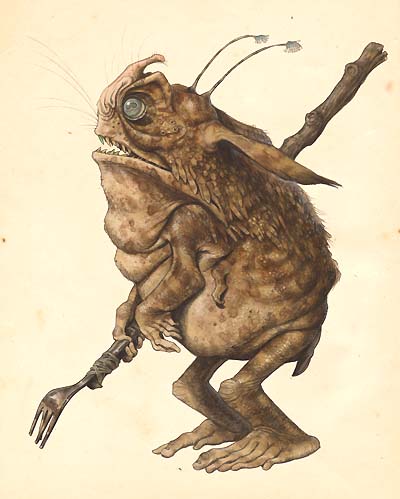 Some day the Spiderwick goblins may be remembered in the annals of faerie lore, perhaps not from my book illustrations, but from the film adaptation – I suppose only time will tell.

However, to see my designs brought to life in the hands of master animators who understands how muscle, fat, and bone should move in a convincing manner is a dream-come-true for me. And I think the fact that Phil Tippett used a literal translation of my goblin designs is the highest praise this movie FX Jedi could give me. I know the 12 year-old Tony would be very happy indeed. 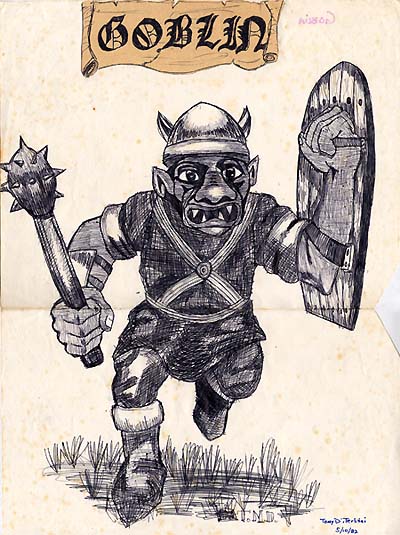