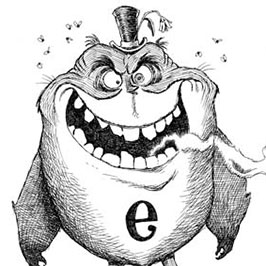 The Story of Gzonk!
Originally posted on Tony's blog November 20, 2008 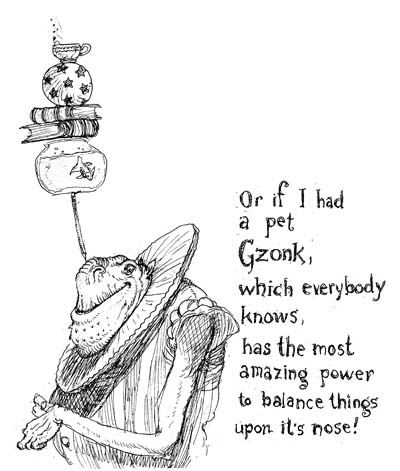 I’ve been meaning to update the FAQs on my site, as I’ve realized that some of my more recent books, like G is for One Gzonk, have not been added.

So I thought I would share some of the inspirations and stories that went into creating this silly alpha-number-bet book in hopes that any questions you may have can be answered here and then added to my FAQs.

The Spark
Gzonk was actually the second book I tried to sell to Simon & Schuster. As I was developing Jimmy Zangwow in 1997, I was also in the early stages of designing characters for a nonsensical alphabet book. In fact, the “Zibble Zook” is actually an early design for the Grimblegrinder…which was called the Zibble Zowell in early drafts of Zangwow. 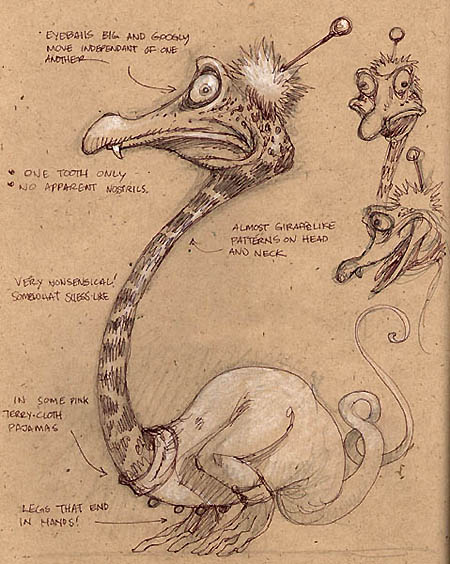 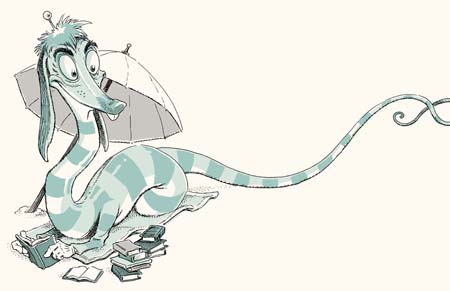 My editor liked the idea of Gzonk, but felt it was too early in my career to do an alphabet book (especially one that doesn’t teach the alphabet). Consequently, he encouraged me to develop a story on the letter H’s “huge and heavy Hoofle-Foofle”… 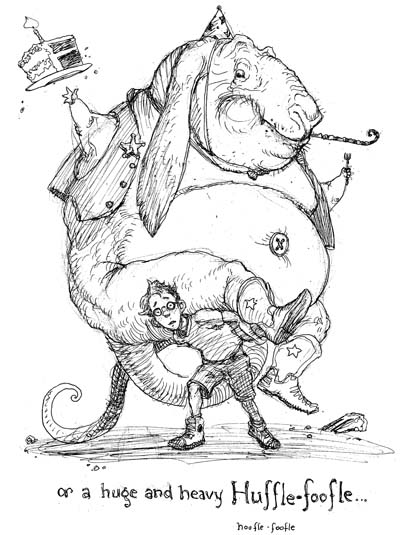 …which I did, and it evolved into my second picture book, Ted. 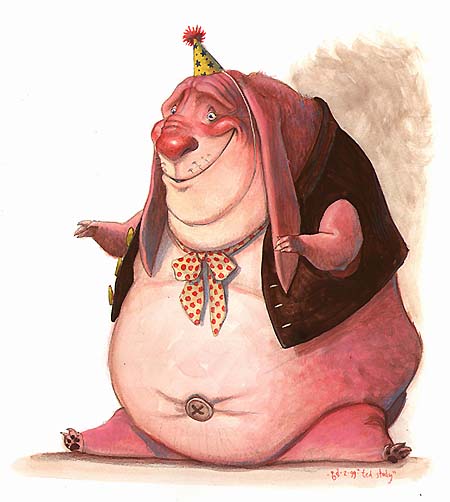 Overall, the menagerie of creatures were inspired by the likes of Dr. Seuss (who the book is dedicated to, along with Edward Lear) and Jim Henson’s Muppets. In fact, the tone of the text and story was reminiscent of an old Muppet Show sketch.

The Narrator
The narrator, Tiny DiTerlooney, is a 6-7 year-old version of me. I wanted the readers to know this, but also know that from the get-go this book was silly, so Angela invented this alter ego for me…which I think I will use again in future books. 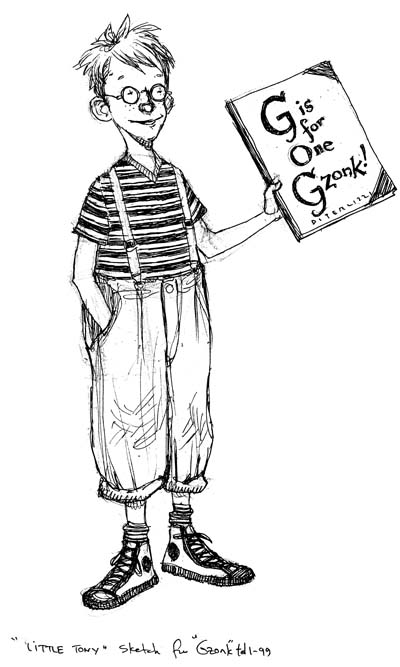 Once all the illustrations of Tiny were sketched, they were painted in one session – often with many on a single page – to keep the look unified as the young narrator rants, dances, and cavorts throughout the story. 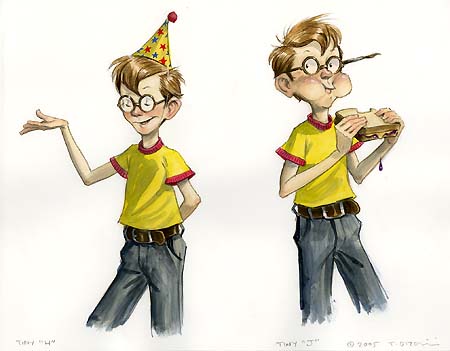 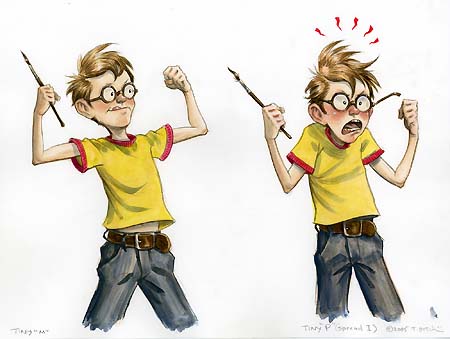 Tiny (along with the “Teedle-Weenie Woos”) was painted in my traditional Holbien acryla gouache with a digital drop shadow added afterwards.

The Creachlings
The “creachlings” that Tiny creates for his own alphabet book were rendered in ballpoint pen and ink on Bristol board. They were all colored digitally with a palette inspired from Maurice Sendak’s Nutshell Library. 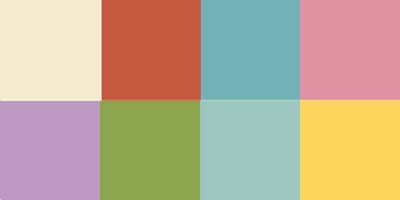 Many of their names were taken from silly words I used as a kid with my brother and sister, along with some new names Angela and I created. Though all of the designs were right out of my imagination, some of them were inspired by things I adored, such as: 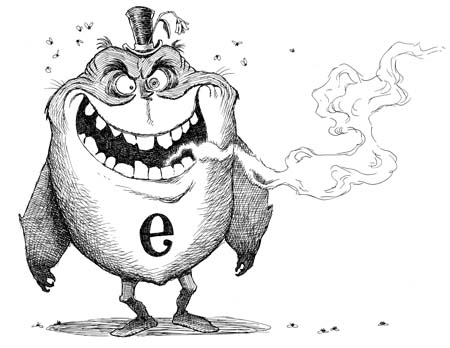 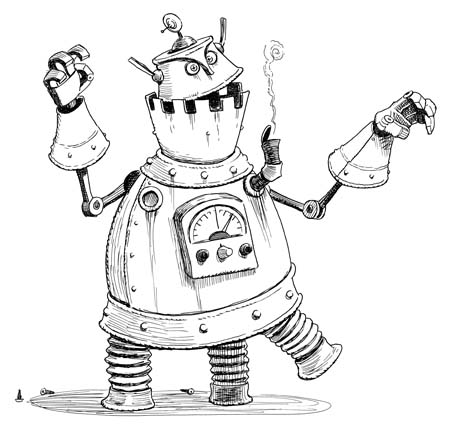 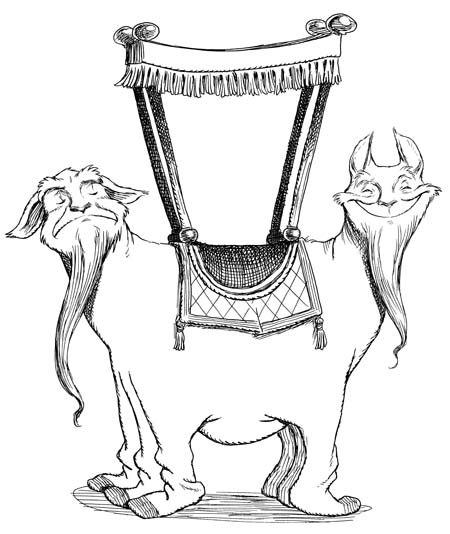 Of course, there is a large, intentional influence from Seuss – from his trademark eyes on the “Orange Oomy” to the Gzonk balancing all sorts of odd objects (ala The Cat in The Hat).

Lastly, as I do in all my books, there is a nod to other books I’ve made. Obviously, Ted makes a cameo, but so does Mr. Moon’s hat from Jimmy Zangwow. 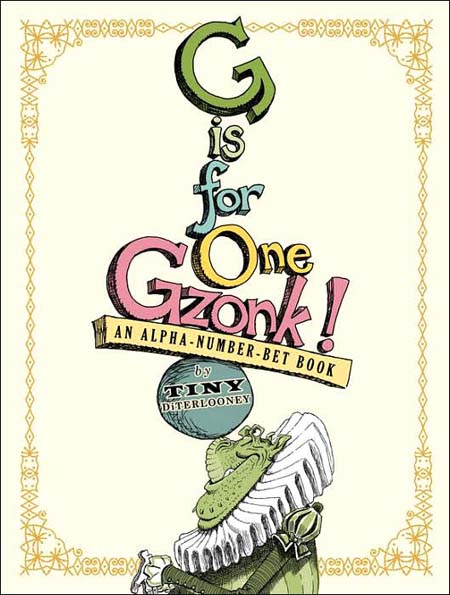 Gzonk was a book about a too-clever-for-his-own-good kid and his runaway imagination. After the success I saw from The Spider & The Fly and Spiderwick, it was the opportunity to create a big valentine to creative geniuses like Jim Henson and Dr. Seuss who continues to inspire me today. I hope this little bit of behind-the-scenes may make it that much more fun for you.