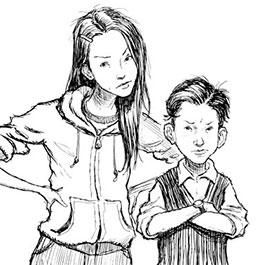 The Secrets of Spiderwick
Originally Posted on Tony's blog Jun 21, 2009

This weekend I finished the last illustration for The Spiderwick Chronicles. As I’ve mentioned I’ve been working on the third installment of the Beyond The Spiderwick books and the series finale, The Wyrm King. The final image rendered was actually the last parting image in the book. Among the final pieces was an illustration of Jared Grace drawing in his sketchbook and following in the steps of his great uncle Arthur. 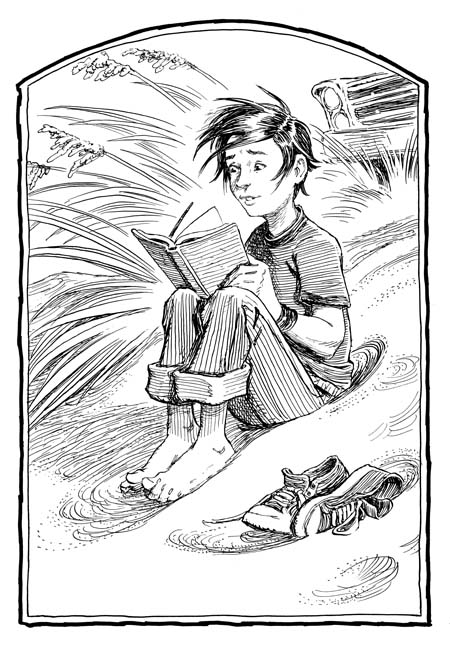 That got me to wondering – How many times have I drawn Jared? So, I did a little counting. And here is some fun Spiderwick art facts for you:

Total number of finished illustrations for the original 5 books, plus the 3 Beyond… books (not counting the front and back matter of each book): 367(!)

Total number of illustrations where faerie-creatures are featured prominently: 129

Both The Nixie’s Song and The Wyrm King are tied as the “most illustrated” with 54 illustrations per book.

While I am at it, here are some other fun art facts from the series that you might enjoy searching for:

page 49 – There are Victorian silhouette images of Arthur and his wife hanging in the water damaged hallway.

page 65 – Angela and I actually owned two pet mice while I worked on the early books. This image was drawn from life.

page 72 – The Spiderwick estate kitchen was based on the kitchen in our first house in Amherst.

page 88 – Mallory was playing an old Atari 2600 as evidenced by the joystick lying on the floor.

page 106 – The Secret Commonwealth was one of Holly’s reference books while working on the series, and can be seen stacked behind Thimbletack.

page 1 – Jared has written his name on the pages of his text book: an old grade school tradition which is no longer done.

page 5 – There’s a portrait of a younger Lucinda on the stair wall behind Mallory.

page 16 – Mallory is looking at the “lucky” horse shoe hanging in the carriage house. It is upside down, which many superstitious folks believe pours the luck out and therefore is a bad omen.

page 98 – Hogsqueal is pointing to Byron with a charred drumstick. (That’s one of my favorite hidden things)

page 72 – As you can soon read about in the upcoming Completely Fantastical Edition, this image mimics the composition of Alice talking to the Cheshire cat from Lewis Carroll’s Alice’s Adventures in Wonderland. 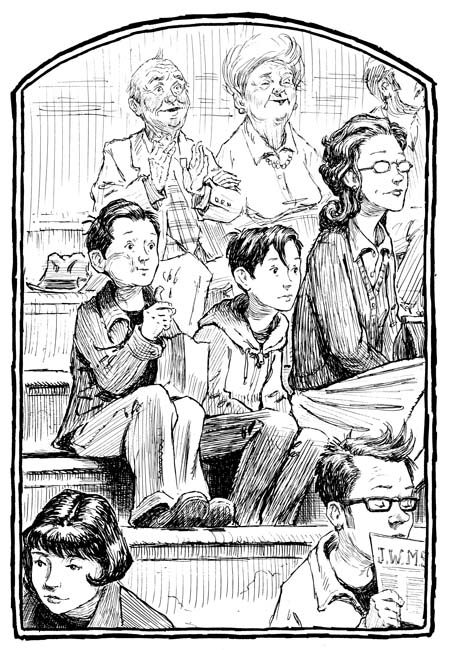 page 12 – As many have discovered, that is Holly and I sitting in the bleachers in front of the Graces. There are also paper-plate portraits pinned to the bulletin board outside of the principal’s office on page 26.

page 89 – The unusual pebbles and stones balanced on the tips of the stalagmites was something I imagined that the knocker had been  doing. Now that you know that, you’ll see his handiwork everywhere in the dwarven mines.

BOOK 5: The Wrath of Mulgarath

page 5 – Mal’s teddy bear can be seen in the debris here along with a copy of a Spiderwick book.

page 40 – There is symbolism here in the two trees which represent Jared (the young birch) and Arthur (the ancient oak).

page 52 – If you look closely, there is a little beetle crawling on the ground near the can. Could that be Mulgarath?

…Holly’s initials can also be found as well as our editor, Kevin Lewis.

page 94 – Tip off that this isn’t Mr. Grace: look at the fingernails.

page 118 – Lucinda’s childhood marbles (from book 3) can be seen on Arthur’s desk.

page 11 – If you unscramble all of the letters in Nick’s soup bowl, it reads “Man, this is so lame”.

page 99 – The sandwich board sign was based on one I’d seen at Atlanta’s Little Shop of Stories when I did an event there in 2006 for G is For One Gzonk.

page 136 – As most Florida residents can relate to, there is a wasp’s nest tucked under the roof of Jack’s shack.

page 16 – Laurie is wearing her locket, even though Nick doesn’t figure it out until page 67.

page 75 – Jack Junior was based on our Spiderwick editor at Simon & Schuster, Kevin Lewis.

page 152 – The composition of the Grace kids mimics the cover to book 1. 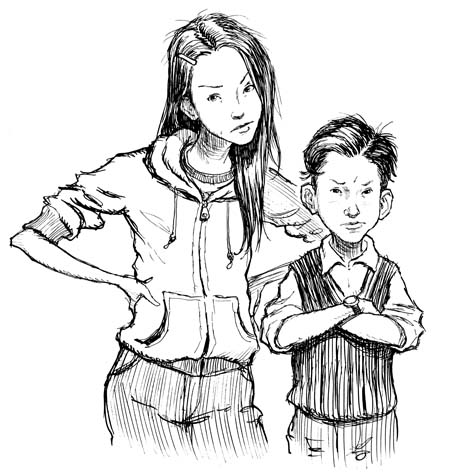 Jared’s “protective” red hoodie appears throughout the entire series, worn by many characters. In fact Mallory is wearing it first in book 1. Later, she borrows it from Jared after her watery escape from the river troll in book 2. Mulgarath himself creates the hoodie when he appears as Jared’s evil doppleganger in book 4, though Jared keeps it on for the remainder of his adventures through book 5.

But it reappears again in A Giant Problem, when Cindy is wearing it. And clever Laurie dons it in the final book.

…what hidden tidbits will there be in the last book? You’ll have to wait and see…

PS – I finished detailing the mermaid piece that I had blogged about earlier. Additional linework was done via Photoshop, what do you think? 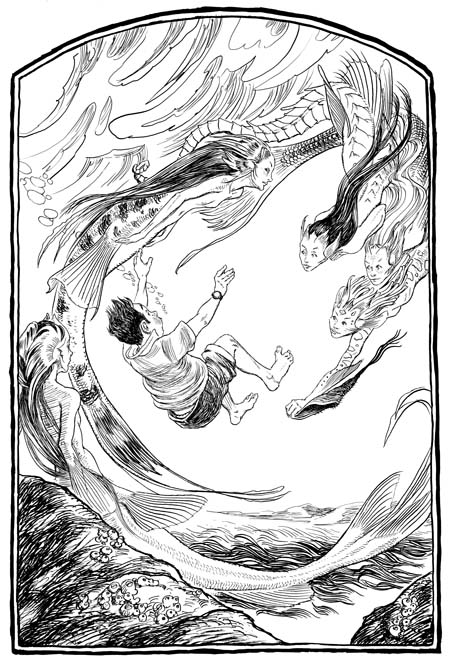