My artistic summer diversions continue with a nod towards the classics, Puffin Classics to be exact.

I was very familiar with these books, having read many of these stories as a kid. The publisher has re-launched the series with a whole new look, and I was absolutely thrilled when I was asked if I could write a forward to Peter Pan (with a cover by one of my favorite living British illustrators, Chris Riddell!)

My old Spiderwick cohort, Holly, was also asked to write an introduction. She will be adding her thoughts to the Bram Stoker classic, Dracula. I was then doubly thrilled when asked if I could render the cover image for this rendition. All those years of illustrating for White Wolf Games is paying off – Woo!

I really like the strong design of the series relaunch, and couldn’t wait to explore within the boundaries they set for the line. Most seemed to be iconic, simple, images rendered in 2 or 3 colors…so what do I draw for the fiendish Count Dracula?

Immediately, I thought of artists I would have loved to have seen illustrate this story: Aubrey Beardsley, Kay Nielsen, and Harry Clarke – those wonderful, wistful, (and oft-times) wicked draftsmen of old. So I began looking at some of their work for inspiration. 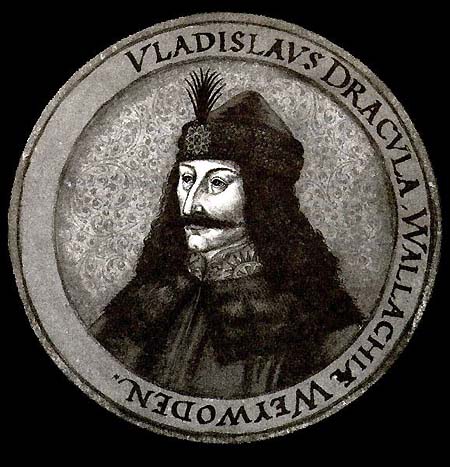 I also did a little research into the physical look of Dracula as well. Though Stoker never confirmed it, many believe his inspiration came from a real person, a Romanian prince named Vlad Dracula, or “Vlad the Impaler” for his notoriously cruel punishments during his reign.

I took the image of Vlad and started playing around with it. If I were to be illustrating the entire book, I would have spent a lot time designing the character, but given its limited use, I instead focused on variations of a theme – which were (hopefully) enticing portraits of Count D. 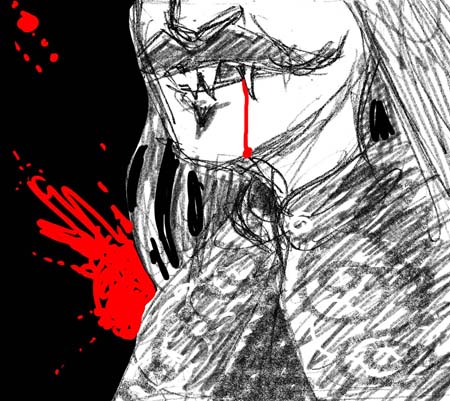 This first sketch is literally mimicking what the publisher had done thus far. It certainly got the point across, and (as the art director indicated) would be the safest route to go. You’ll note the large pointed front teeth as well as the elongated canines. As I researched vampire bats, I realized their biting teeth are in the front as well as the fangs we often imagine when thinking of Dracula…man, if only Arthur Spiderwick had recorded a vampire in his guide… 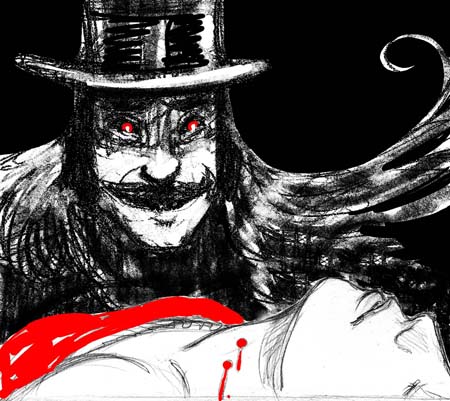 Sketch 2 shows Count D with a victim. I wanted to indicate the tell-tale signs of the vampire bite, and have Dracula slipping off into the shadows. I was jazzed about the contrast of his dark lines with the woman’s thin outline. In fact, this sketch is actually the result of several incarnations where the placement of the victim was explored and the heaviness of the shadow tweaked. 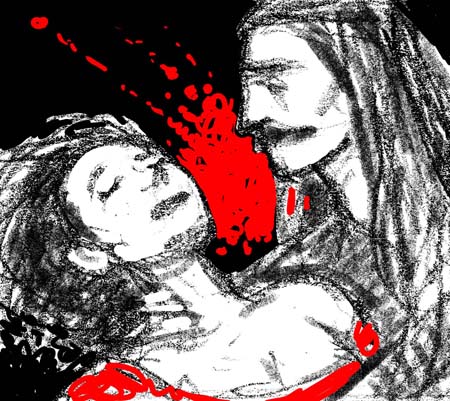 The third sketch was a narrative showing the connection between Count D and Mina. I didn’t think the publisher would go for it, but I was intrigued by the idea of a romantic image (however dark) nonetheless. 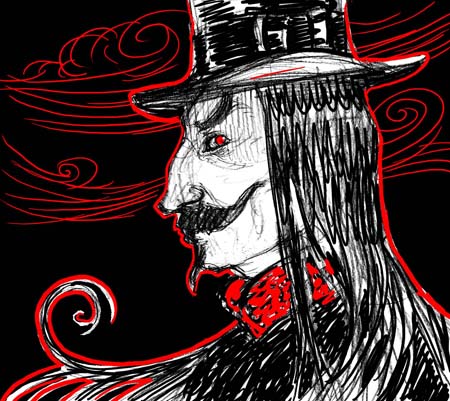 For the instantly recognizable reaction we wanted for this cover. I returned to the first sketch and pulled out a but showing more formal profile of Dracula. I think I was just so inspired by the old portrait of Vlad…so I gently played with some Art Noveau-ish lines and really tried to use the second color of red in an interesting way. 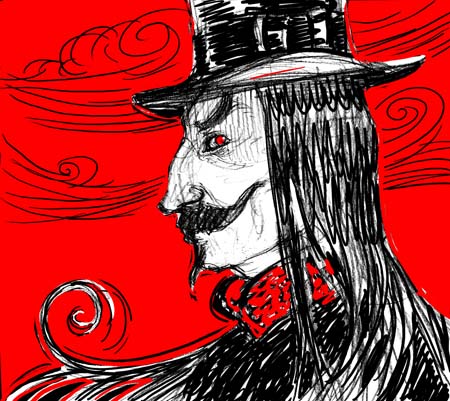 In fact, I even tried a red sky, just to see how it would look – but it was a little too much red for my taste.

Below is the final inked image. All the sketches were simply done in pencil, then scanned into Photoshop, where the solid colors were added. Here, for the final, I inked it in my usual tools (black FW ink, Hunts 102 nib on Strathmore plate bristol) and completed the final in the computer. 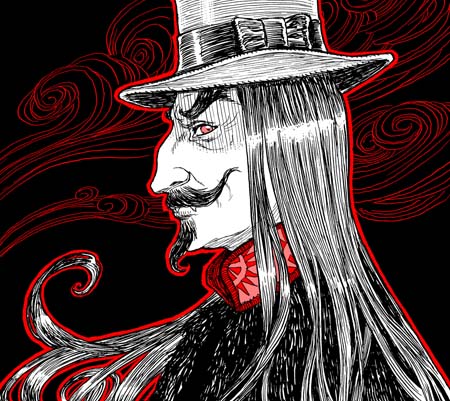 …and here’s the final jacket from the publisher. 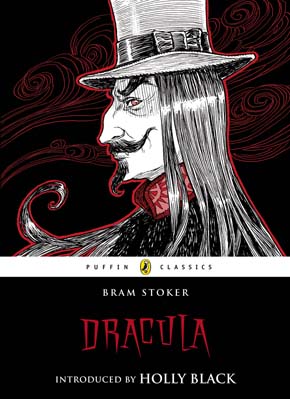