Despite all the fantasy stuff I’ve done in my career, I never get very excited about drawing dragons. Seriously. In fact, I kinda-sorta dread it.

Dragons have to be the most overwrought, over-rendered, over-exposed creatures in modern fantasy today. They are found in video games, books, toys, television and movies as they are integrated into almost all the world cultures since ancient times. Consequently, it seems like every possible rendition of this mythical beast has been done. How can I come up with something new, exciting and fresh after centuries of masters have already done so? 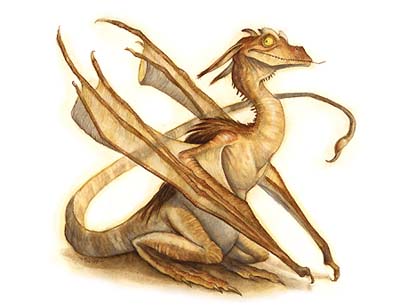 Honestly, I don’t like drawing them – even though I think they are awesome creatures and I love stories about them. There’s Smaug, Fafnir, Puff (the Magic dragon), Dragonslayer, Dragonheart, Dragonology, the Hydra, Falkor, Eragon and, of course, Dungeons & Dragons.

Ironically, despite my years of contributing art to this iconic fantasy game, I hardly ever rendered its namesake beast. There were quite a few gaming illustrators who had the dragon-thing covered, which was fine by me. I did however, do a few dragons for the gaming magazine of the same title. Even though they are on my site, I will post them here again. 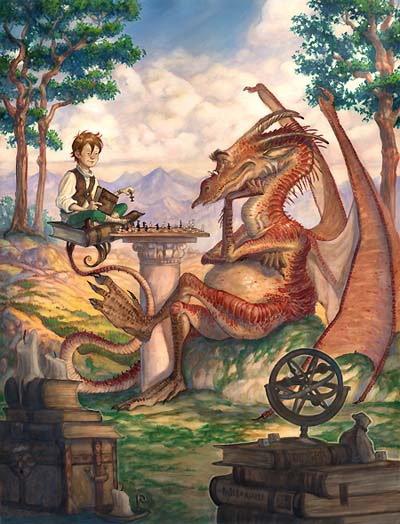 In these projects, I went more for a mood and setting over a novel design. The first image, of course, is about the joy of playing games. The second is more about illustrating the power of the female mage who has the ability to conjure up a massive dragon. 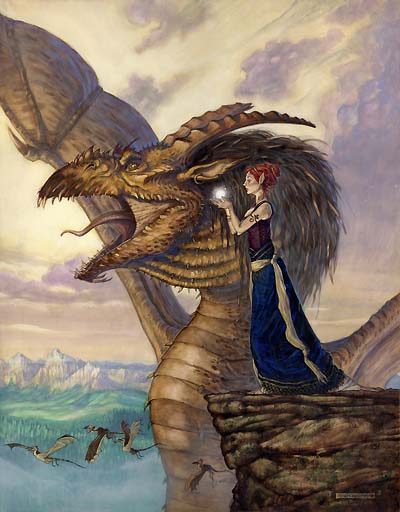 I recently cleaned these images up for a book anthology on dragons published by the French fantasy gallery, Galerie Daniel Maghen.

The gallery asked me to do a new illustration of a dragon – any kind of dragon at all doing dragony things. And they had all sorts of great dragon-scribes adding to the book – Todd Lockwood, Tom Kidd, Jean-Baptiste Monge, and Paul Bonner to name a few. Their dragon depictions were wonderful, and they were doing great dragony things – but I just wasn’t feeling it. Though I did have a sketch of an old knight fighting a slithery dragon: 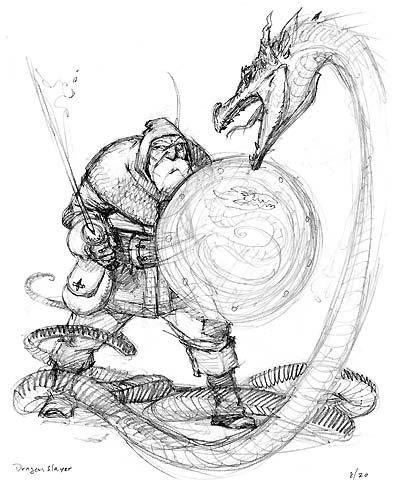 …which they liked, but I felt it was a little trite. And, for some reason, I liked the energy of the sketch more than what I envisioned the final painting to be. Perhaps I am wrong, and I’ll get up the gusto to finally paint it one day.

Then I got clever. I decided to do my own take on a famous dragon image: Rapheal’s 1506 painting, “St. George & the Dragon”. 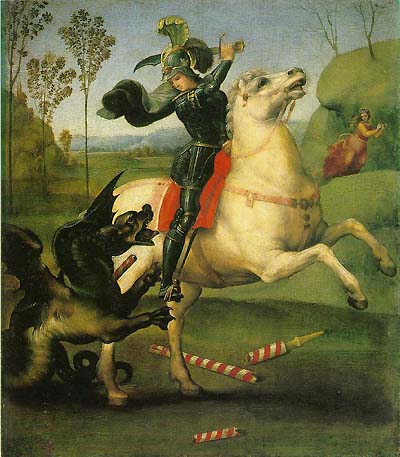 Mine was titled “Georgie Boy and the Backyard Dragon”. And I didn’t bother redesigning the dragon (or the horse head) and they didn’t like it. It wasn’t dragony enough I suppose. So I opted for the old dragon covers instead. 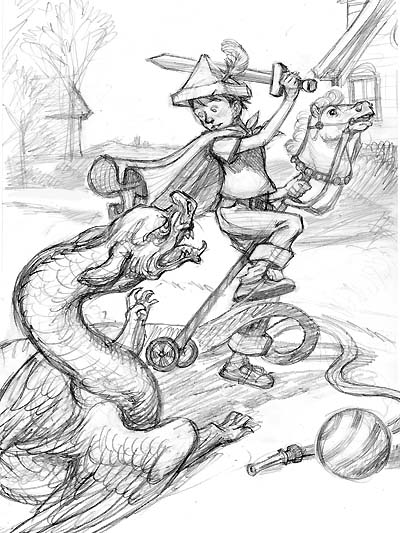 See? These are tough critters to get excited about rendering. At least they are for me…though I wonder if I should paint my rendition after all…hmmm.

I can see it on a greeting card with a note inside saying “Glad your feeling better – now go slay a dragon” or something cheesy and inspirational like “We all have our battles to fight and facing our fears is the biggest”.

Rapheal would be proud.

Next up: Space Dragons!