I’ve attended San Diego’s Comic Con International off-and-on since the 1990’s and I’ve watched it grow to become the daddy of all geek conventions. Despite the long airplane flight, long lines and 200k+ crowd, it is a fun four-day ride. 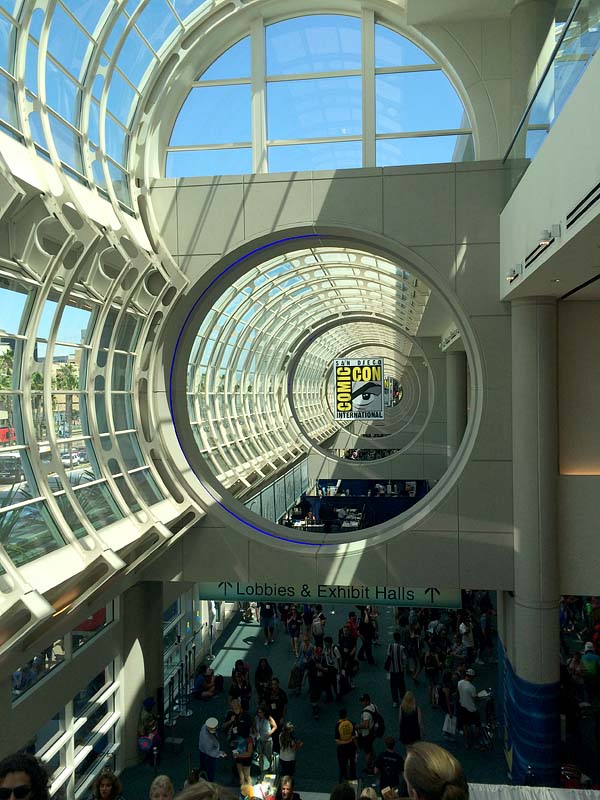 I’ve always felt that I am a bit of an odd puzzle piece as a participant in the programming for Comic Con. Compared to other massive conventions, like BookExpo, there are far fewer kid’s lit author/illustrators present–and many that do attend are either current bestsellers or their book is Soon to Become a Major Motion Picture. I suppose my books fall somewhere in this category and I am thankful for that. 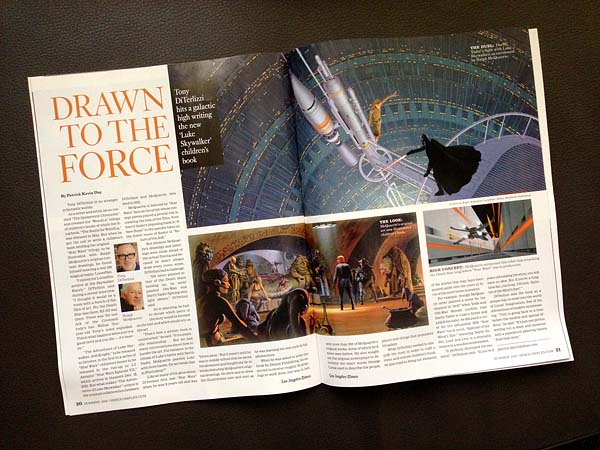 As Angela and I shuffled past the decorated booths, I was reminded that Comic Con is a grab-bag cross-section of pop culture in media. Film, television, nerdy apparel, toys, games and books were all featured prominently. About the only thing that wasn’t front and center were good ol’ comic books, which seem relegated to the outer fringes of the convention floor.

But, because there was such a mix, I bumped into all sorts of creative types: like fellow artists and writers, sculptors and film-makers. 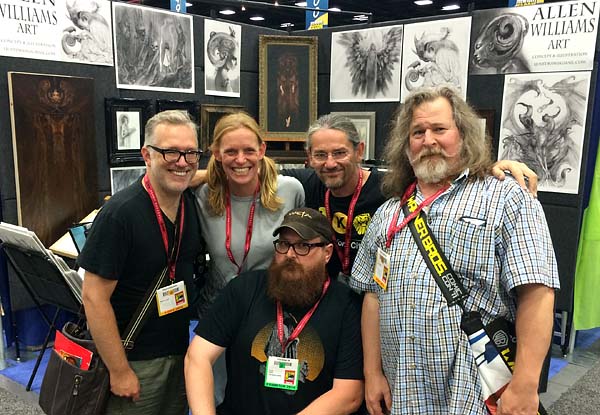 Next to me are Vicki and Allen Williams, director Kirk Thatcher, and artist Travis Lewis sits front and center. 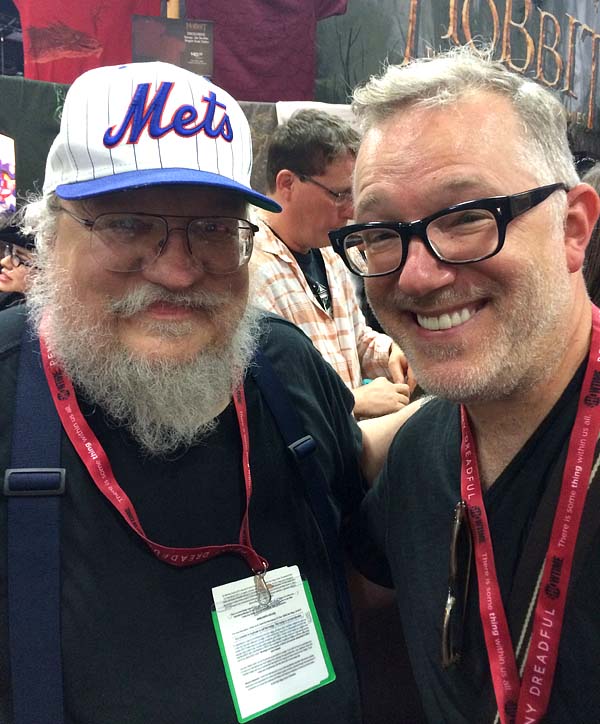 HBO’s ubiquitous Game of Thrones series dominated the con. Here, I met the book’s author (and the winner of the Game of Thrones) George R.R. Martin at the Weta booth (there’s Weta Workshop founder, Richard Taylor, right behind us). After stalk-chatting with George for several minutes, he had some of his characters remove me from the premises: 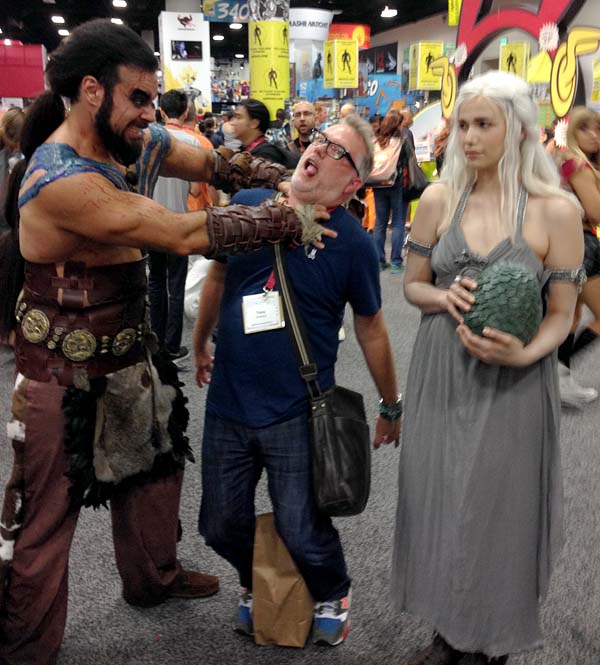 But I was remembered by my old friend, artist Donato Giancola–who used my likeness as one of the Night’s Watch in the 2015 Game of Thrones calendar. Scratch that one off of my bucket list. 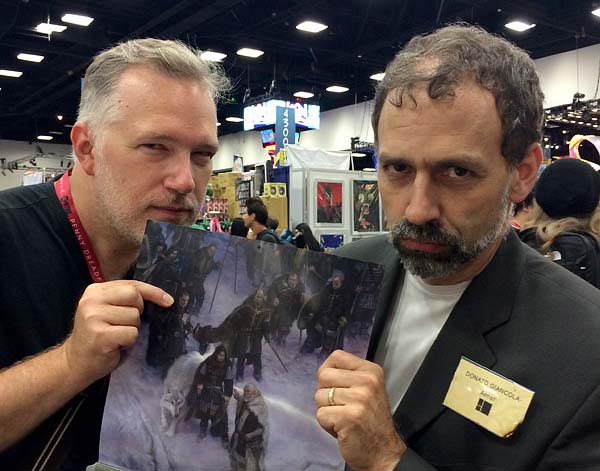 I participated on a couple of panels, including “Fairy Tale Remix” moderated by the award-winning author, Shannon Hale (who may, or may not, be part of a crime-fighting duo). 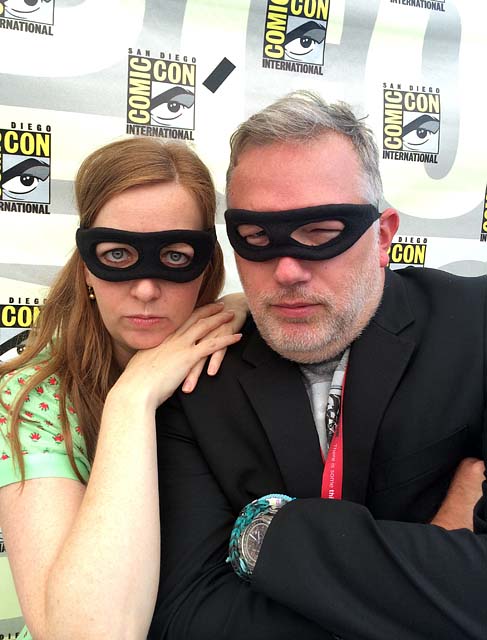 The conversation on the influence of fairy tales in modern storytelling was lively and the audience’s questions were thought-provoking. (Lytherus.com has a nice, detailed write-up on the panel). 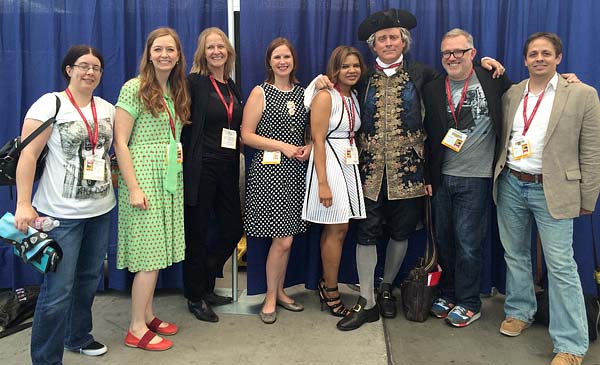 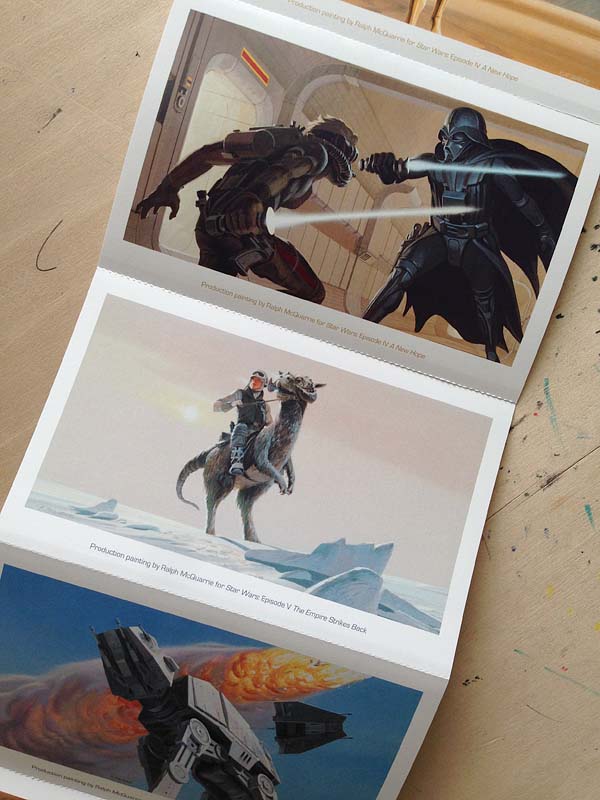 Friday was “Star Wars Day” at the con (in DiTerlizziland, every day is “Star Wars Day”) and I presented the upcoming picture book The Adventures of Luke Skywalker, Jedi Knight (featuring illustrations by the legendary Ralph McQuarrie). Along with Exec. Editor of Disney Publishing, Michael Siglain, and Lucasfilm historian and author, Jonathan Rinzler, we talked of how this book came to be and offered up inside stories of the development of the first screenplay as well as Ralph’s place in Lucasfilm history as the visual genius who presented the first glimpses into a galaxy far, far away. 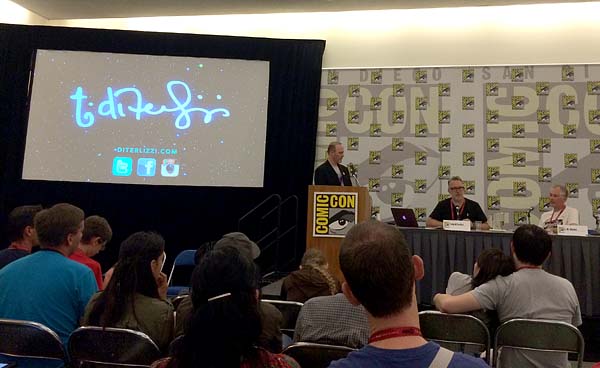 I had a moment when Jonathan told me that he thought Ralph would have liked how this book turned out. That meant a lot to this ten-year old kid and I am still beaming from his comment.

The Star Wars fun continued when Ang and I reunited with film effects dungeon master, Phil Tippett, who was not only responsible for bringing to life childhood cinematic moments (like the AT-AT attack in The Empire Strikes Back or the dinosaurs in Jurassic Park) but goblins, trolls and Hogsqueal in The Spiderwick Chronicles. 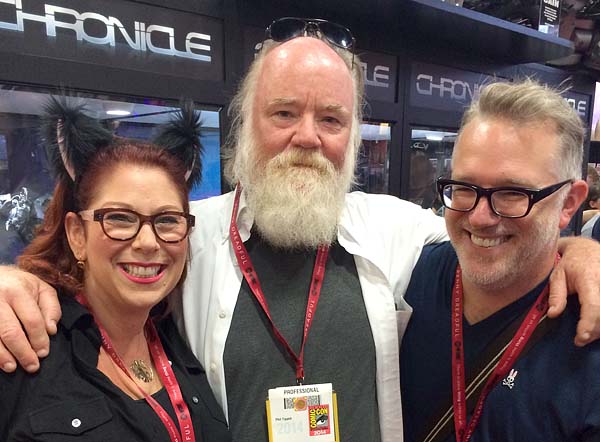 After my authorial duties were completed it was time to spend some hard earned royalty money. For many nerd collectors, Comic Con has become a one-stop-shop of the weird and rarefied. In fact, there were one-of-kind props from some of my favorite films, like Marty McFly’s hoverboard from Back to the Future II. (price tag: $30k): 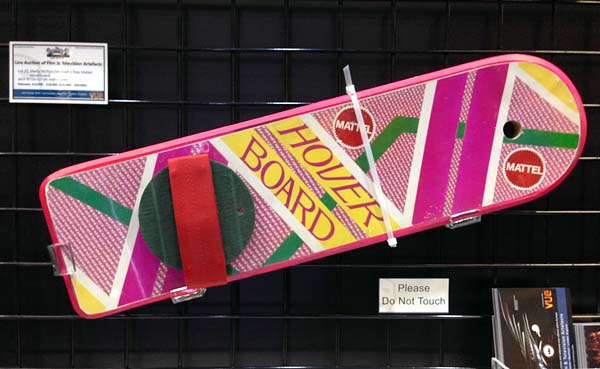 …or one of the puppets from Beetlejuice: 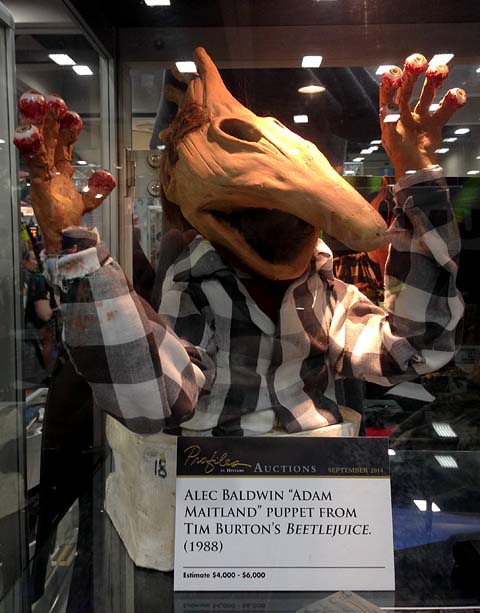 If your a 70’s kid trapped in a man’s body (like me) then you’ll love these Kenner-styled Alien figures. Sure, they’re about 30 years too late, but you know what they say…(in 1979 no one can hear you scream…for Alien action figures?) 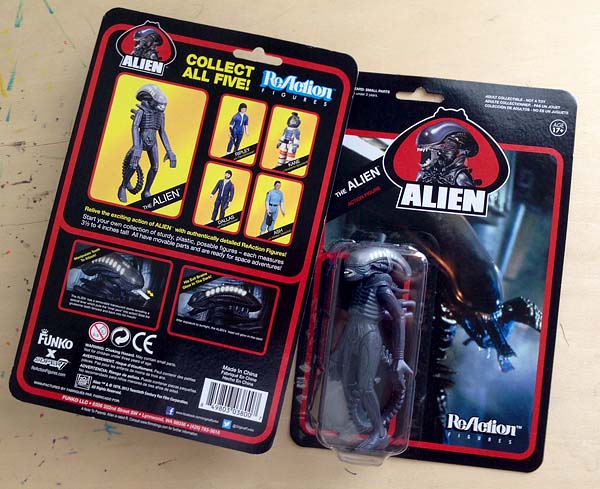 Speaking of toys, Sideshow toys melted my brain with a new line of incredibly detailed creeptastic ghouls and demons called “Court of the Dead”. If you were a fan of McFarlane Toys or Wayne Barlowe, you’re gonna love these. Take a look: 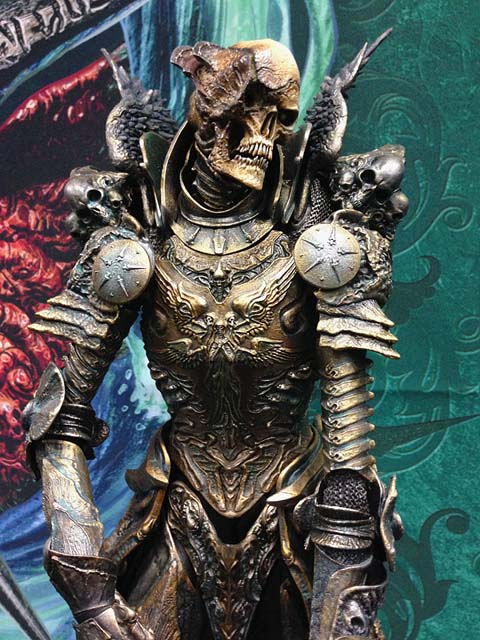 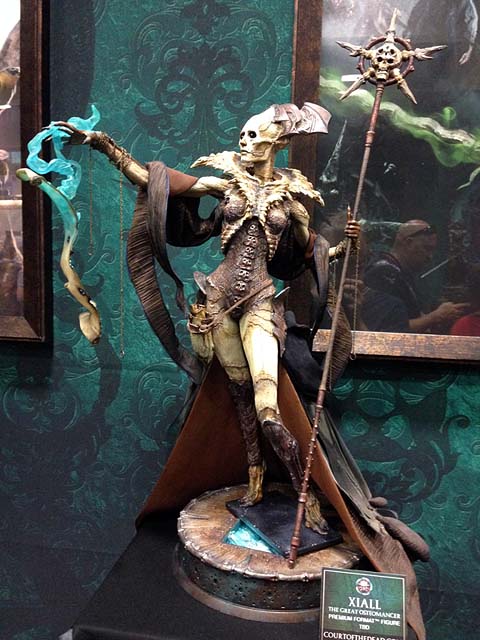 Lastly, I nabbed a few limited edition artist’s sketchbooks. By far, this is my favorite sort of thing to hunt down and purchase at the con. Fortunately, booksellers (like Stuart Ng Books) had many to choose from like this reproduction of Claire Wendling’s sketchbook. 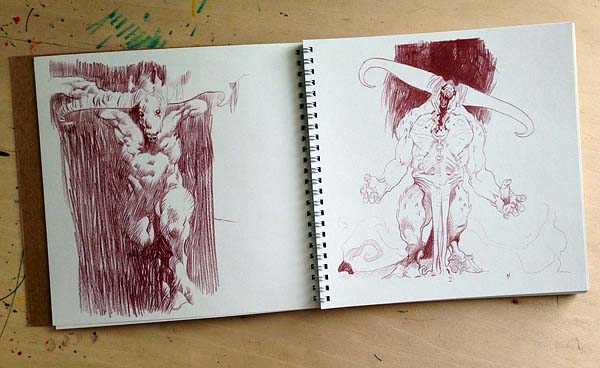 …and, yes, I dropped off a handful of signed The Battle for WondLa: Sketchbook III to Stuart who should have them for sale on his site very soon. I’ll share a link once they’re up. In the meantime, “Stay classy San Diego. I’ll see you next time.”