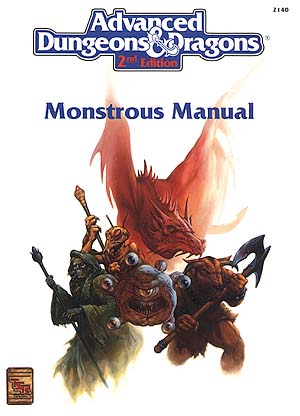 The AD&D Monstrous Manual (MM) was my second monstrous assignment for TSR. I had just handed in the artwork for my first job, Dragon Mountain, and received a call from the MM editor Tim Beach.

It was 1992, I had just graduated from college, and was living with my parents. My younger brother, Adam, and my good friend Mike, had encouraged me to submit stuff to TSR and the Monstrous Manual was a dream-come-true project for me.

Adam and Mike had encouraged me because they had seen the drawings I had been doing in my sketchbook for the past year of Beholders, Shambling Mounds and Mind Flayers – some of which had been in my initial submission to TSR. So when Tim called me to see my interpretation on their classic creatures I simply just sent him my sketchbook.

At that point, he wanted me to illustrate the WHOLE book – over 300 illustrations! But the deadline was so tight there was no way I could do it, so we decided on half (which was still over 100 drawings!)

I had no money (I was still waiting for my payment from Dragon Mountain). So I used leftover school supplies consisting of pencils, Berol Prismacolor markers, and pastel pencils all rendered on laser paper. You read that right. Crappy, crummy, thin-n-flimsy laser bond paper. Of course, it works well for blending the alcohol ink for the markers, but it hardly will stand the test of time.

You can see some of my favorite finished images in the ART/GAMING section of the site. In the meantime, here are some snapshots of the sketchbook that I sent to Tim.