As a maker of books, I am a collector of books. Actually I am a collector of many things as you will soon see in future posts.I want to share books that have affected me in some way: either by art, story or otherwise. My hope is that it will inspire other young creative minds like me or, at least, give a clue to my influences.

After the last post, I thought of focusing on Alice’s Adventures in Wonderland. But I think I will save that one for later and, instead, hop to another book that had a tremendous impact on me: the Advanced Dungeons & Dragons Monster Manual.

First let me tell you that I did not own this book until about 10 years ago when I bought a used copy at a flea market in Brooklyn – its true. So how could this book have such an impact on me?

It is 1981, and a game craze has swept the nation. Next to the Rubik’s Cube and Atari 2600, Dungeons & Dragons (D&D for short) has all types of people rolling dice and casting spells before it recedes to a crowd of brainy intellectuals and geeky nerds. I am in 7th grade, and I fall under that latter category.

I attend Murray Middle School (we called it Murray Mental) and I still look like I am 9 years old even though I am 12. At this point in my life I love to draw, and have done so since I was very young – but so too have other kids, so I don’t think I am doing anything out of the ordinary.

One of my good pals, Rob, has all things D&D.

I have the basic boxed set – and that I have to share that with my younger brother and sister. Rob has all the hardcover books, even the Cthulhu version of Deities & Demigods.

I have notebook paper to create my characters on. Rob has pre-printed “official D&D player sheets”.

I have one adventure, “The Keep on the Borderlands”, that came with the boxed set, Rob has every adventure module you can think of and the little lead miniatures to boot.

But my favorite thing of all that Rob owned was the Monster Manual – an encyclopedia of all the D&D monsters. Immediately I loved the simple, high-school-student-folder-doodle pen & ink drawings of David Sutherland, Erol Otus and, (my fav of the bunch) David Trampier (or DAT, as he signed his art). 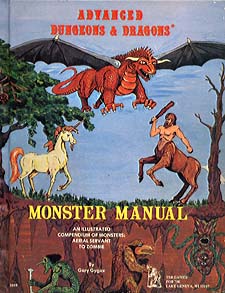 Trampier’s woodcut-like, tattoo-inspired graphic renditions of goblins, dragon turtles, lizard men and giants just blew me away. And I wanted to draw just like him. So I used a tried-n-true technique that all grade schoolers know, and asked, “Hey Rob, can I borrow this book tonight and bring it back to you tomorrow?”

Sure enough, he was cool about letting me take the sacred tome home where I meticulously copied as many of the images as I could before returning it. He also let me borrow it so that I could use the schools art dept. opaque projector to copy some of my favorites. In a time before copy machines, scanners and jpegs, this was the only way I could get a copy of some of these cool images for my own library. And I loved these drawings so much. I still have them to this day. 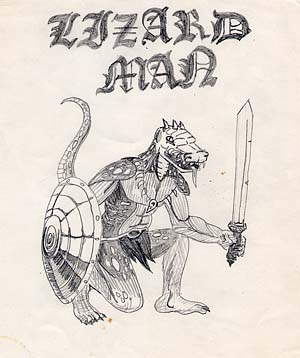 To say that this had an impact on my art and career would be an understatement. Next, I’ll ponder on just how much of an impact it truly had… 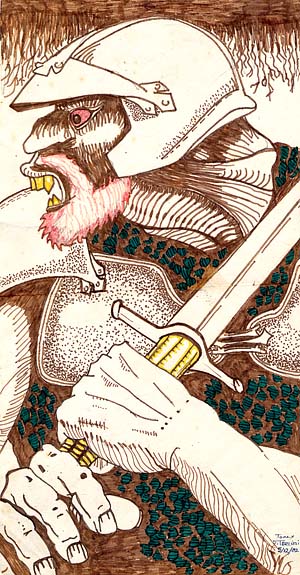