The older I get, the more I am convinced life is but a series of circular motions. But each time your orbit returns to a pivotal point in your life, your journey affects it in such a way that you now see things in a slightly different perspective. I swear. I don’t know…I am certainly no student of philosophy, but I can’t be the only one who thinks this. 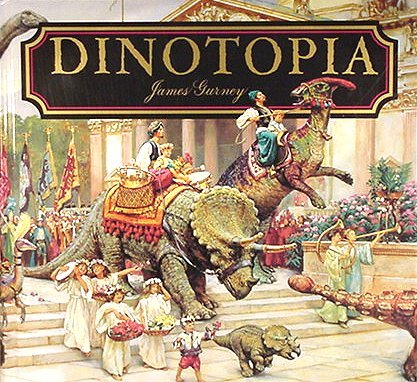 Consider the CURIOUS and AMAZING interaction I have had with Dinotopia deity James Gurney. Actually he goes by Jim…I am not sure if he has any other nicknames like “Jimbo”, “J-Dog” or “The Gurnster…I’ll have to find out.

1992: I am 2 years away from art school graduation, and in the school library, I spy a tome which is wonderful to behold. Just like the time I found William Stout’s Dinosaurs in high school, once again the little boy in me is giddy with renderings of prehistoric pretties realistically rendered in a Jules Verne-esque world.

On top of that, I have the cursory knowledge to recognize the influence of Sir Alma Tadema (and perhaps a sliver of John Waterhouse?) combined with the observational design so prevalent in books by the late Dutch master, Rien Poortvliet. In short, the combination is somewhat familiar and comfy, while being presented in a completely new fashion. Not since Brian Froud and Alan Lee’s Faeries had I been so blown away by a book.

The idea alone was novel enough: turn-of-the-century father and son travelers explore an island inhabited by humans happily co-existing with civilized dinosaurs. But the combination of Jim’s quick oil-wash sketches contrasted against majestically realized vistas – not to mention his wonderful calligraphy, made this book an instant classic with kids and adults alike. And it certainly was in my mind when I designed Arthur Spiderwick’s Field Guide.

Many years later, I got to meet Jim at a picnic-party he was holding at his home in upstate New York. Michael Kaluta had invited me to join him on what was a bit of tradition among the Hudson Valley artists (like Stephen Hickman, Jeffrey Jones and Berni Wrightson) where there was food, music, and lots of art show-and-tell. Needless to say, I was seriously intimidated by that talent pool as we drove up from the city. However, all fears were washed away after I met Jim and all of his friends – they were a warm and inviting bunch.

From then on, Jim and I kept in touch either by phone or by mail. I’d send him my books for his library; he’d do the same with his later installments of Dinotopia. I even coerced him into supplying a blurb for Dinosaur Summer, a (now out of print) book I illustrated for Greg Bear. Here’s what Jim had to say:

“Tony DiTerlizzi has given a labor-of-love treatment to the artwork, with evocative illustrations throughout.”

Wow. A quote for me from a guy who redefined dinosaurs. I barely knew how to paint when I received this praise. 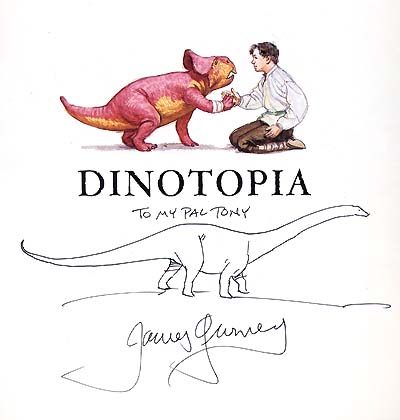 It gets better – earlier this year, Jim asked me to blurb his new Dinotopia book, Journey to Chandra. Here’s what I had to say:

“With lush settings reminiscent of Sir Lawrence Alma-Tadema, colorful characters cast from Norman Rockwell, and vivacious dinosaurs conjured from the spirit of Charles Knight, Dinotopia: Journey to Chandara is a window into this modern master’s mind. Children and adults alike will enjoy exploring this rich world of Jurassic proportions.”

Yesterday, Ang, Sophia and I went to see Jim speak and sign at the Eric Carle museum. He and his wife, Jeanette, were so happy for all of our successes and our new family. I had to pause at one point and just soak in the moment – it was really cool. 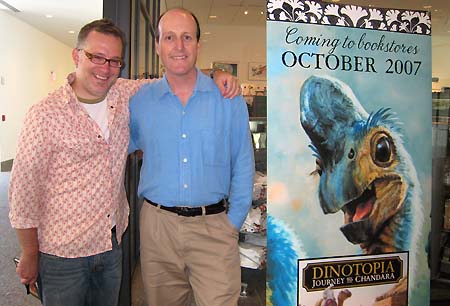 PS – Jim’s joined the blogosphere as well. Check it out!