Anne McCaffrey passed away yesterday in her home in Ireland at the age of 85. Though Anne authored numerous books, many know her as the grand storyteller of the beloved Dragonrider of Pern series, originally crafted as novellas when they were released in the late 1960’s.

I had the opportunity of re-imagining and re-illustrating the first Pern book, Dragonflight, in 2002. And, though it met with mixed reviews with Anne’s diehard fans (including her editor at Delrey Books), I was honored to be a part of the Pern legacy. I still have my dog-eared paperback, with Michael Whelan’s classic 80’s cover, from my middle school days. 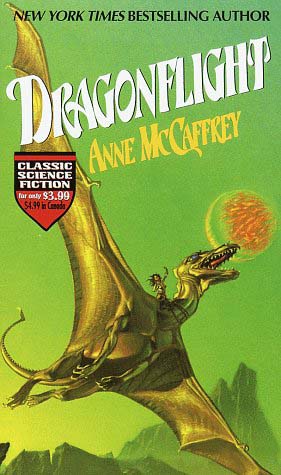 I never met Anne, and honestly I don’t know if she saw my interpretation of her world. Regardless, her words did inspire me greatly and I believe they will continue to do so for many generations of readers who dare to imagine. 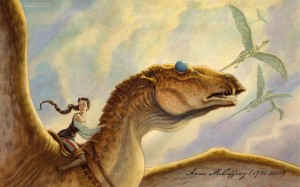 Here’s a desktop image I’ve made for my fellow Pern fans. Simply click the image for a hi-res file.