A Story a Day or I Just Can’t Play

While touring through the UK last month, I became aware of a wonderful British children’s television series called Bookaboo. Its about a rock-star drumming dog named Bookaboo (who clearly is inspired by Bret Michael’s headwear). Bookaboo won’t play for his band until he is read a picture book – preferably by a celebrity visiting him backstage before the show (Hey, some bands want blue M&M’s, others…). Hence, Bookaboo has a catch phrase, “A story a day or I just can’t play.”

The show launched in 2009 to fab reviews and loads of awards. Its goal is to show a parent sharing a story with a child can be hip: neither the book nor the experience has to be boring. And, of course, the producers have excellent taste in choosing the books that are read to the drum-pounding pup. 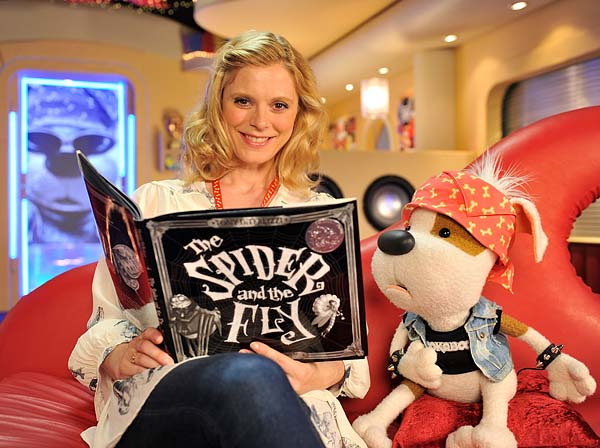 Award-winning English actress, Emilia Fox, read Bookaboo my rendition of The Spider & The Fly last fall. Seeing that we are nearing Mr. Spider’s most favorite of holidays (and mine, too). I thought you all would like to watch a clip from the show. Enjoy, sweet creatures!

Video not loading? You can watch it, along with other TDtv, here.