11 year-old Abby from Clapham, England is quite a fan of The Spider & The Fly. “How big of a fan?” you ask. She’s such an awesome fan that she penned an awesome sequel. Check it out. 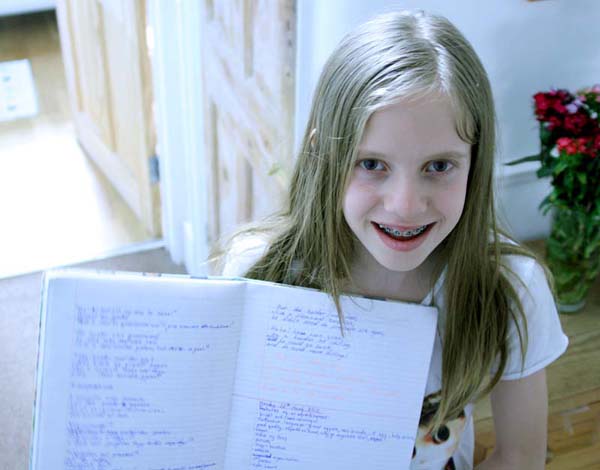 The Spider and the Fly 2

“Hoorah! My plan has finally worked,”

Thought the spider in his head.

“I have eaten up that poor fly now and she is long dead!”

The spider laughed and laughed with glee.

He then set off for a snack,

But he heard an unwelcome knock on the door

That stopped him in his tracks.

The spider went to open the door

When the visitor barged inside

He could not even hide.

“You have the right to remain silent,”

“We think you are a murderer

And you are hereby under arrest.”

The spider met his lawyer,

The odds were not good at all,

But at least they had a plan.

The opening speech was made,

A story of his knighthood.

The jury seemed to lap it up,

The ghostly fly was called to the stand,

An oath is what she swore,

She then began a gory tale

Of what happened two nights before.

Next to be questioned were two ghost bugs

“We warned her but she didn’t listen!”

They pleaded to the judge.

“Now I shall be questioned and I’ll give answers sublime!”

The spider was questioned,

He gave tales that were tall.

“The spider and the fly?

What a tale of great height.

Why I haven’t seen old Tony

A surprise was in store

For the spider, aghast

As his ex-friend Mr DiTerlizzi

Had arrived at last.

I have not forgiven Tony to this very day!”

And the spider did not draw breath until he had gone.

“The jury will now pass their verdict.”

Said the judge to the court.

And the spider’s throat was rather taut.

The jury came back, then came the judge.

The spider was ready,

Prepared for the worst.

He knew it was coming,

His tears were well rehearsed.

But the spider was met

With a pleasant surprise.

He didn’t need to prepare his eyes.

Haha! He was free

Of a burden so chilling.

Now he could go back

And do some more killing.

…Here’s what I love: Abby uses the meter of the original poem AND creates a twist ending. Delicious! Perhaps you’ll enjoy the 10th Anniversary edition of S&F that will be creeping its way to bookstores later this year…more on that next time.