Patrik is a teenage artist from a small European country named Slovenia (located next to Italy, Austria, and Croatia) who has been inspired by The Spiderwick Chronicles.  He read the series about four years ago, in his native language Slovene, and became inspired to create his own fantastical project, which took him three years to complete!

This commitment is nothing new for the young artist.  In fact, Patrik discovered his passion for drawing when he was just five, and continued to exercise his talent through grade school.  Like me, he looks to many similar sources for inspiration.  “I love nature, and not just nature, but everything that is natural which has a feeling of pureness,” he explained in his email.  Of course, the natural world had a great influence on me when I was creating Spiderwick. I studied and drew from museum specimens and other forms found in the wild to guide me in creating a more detailed world of the fantastic. 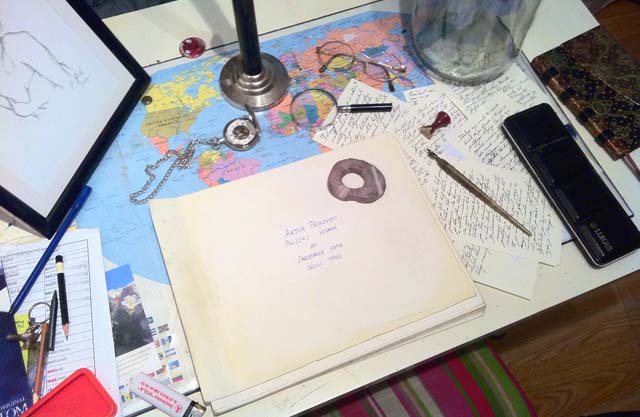 Patrik, saw this connection and was so inspired by the information found in Arthur Spiderwick’s Field Guide to the Fantastical World Around You that he decided to make his own rendition of the book.  Above you can see the cover of the piece surrounded by objects Mr. Spiderwick would have had close at hand – spectacles, a compass, an ink dip pen, magnifying glass, and (of course) his seeing stone.

Here are only some of the beautiful pages of Patrik’s homemade field guide.  Detailed renditions of goblins, ogres, sea maids, and many more familiar creatures fill the pages, providing documentation that Arthur Spiderwick would be proud to see.  Note that the information included in the drawings have been translated to Slovene.

The Griffin centerfold is one of my favorites…

…and, of course, instructions on how to use a seeing stone. Nice work, Patrik.  This field guide is splendid.

From Massachusetts to Slovenia: